Bank earnings this morning were disastrous (IBM as well) and yet the markets are ignoring the horror show from the financials. Bank of America Posts Adjusted Loss Excluding "Benefits" From Spread Blow Up and Goldman Reports Massive $0.84 Loss Per Share, Prop Trading Loss Of $2.5 Billion, Comp Accrual Of $358,713 Per Employee (both ZeroHedge)  pretty much put the financial issues in a nutshell especially combined with WF, C and JPM disappointments already. Don't tell the markets though, they are waiting on AAPL tonight. (Earnings Calendar HERE.)

And Meanwhile Over In European CDS Land... | ZeroHedge. Nothing to fear here, just the credit and bond markets absolutely gong ape shit over risk that the stock markets ignore on a minute by minute basis. STB readers all know to follow the smart money (hint - not equity traders). The issue is timing the move. Patience is required. Confidence is not, the eventual meltdown is virtually a sure thing.

I'm not sure how long they can hold out the charade "all will be well" in Greece much longer. STB readers have known that the bailouts and fixes were BS from the start and have in reality made the debt problem there worse than if they had just defaulted in the first place (sound FAMILIAR?). "Greek ships were harbored and garbage rotted in the streets of Athens on Tuesday as angry workers built momentum for "the mother of all strikes" expected to bring the country to a halt in protest against a new package of tax hikes and wage cuts." Greece braces for shutdown as austerity vote nears | Reuters

This was up yesterday but bears repeating - Moody's warns France on possible negative outlook | Reuters. With Germany not willing to go down the Wiemar road again, it is only a matter of time (maybe less than a WEEK - pay attention on 10/23) before it all falls apart.

STB reports very little on China because basically everything that comes out of there is BS. Seriously, they may be the only nation spewing more shit that the good 'ol US of A. "China's economic expansion slowed in the third quarter to its weakest pace in more than two years as euro-debt strains and a sluggish U.S. economy took a toll, but healthy domestic drivers suggest little room to relax monetary policy near term." China growth slows to 2-year low | Reuters

In the funniest thing you have herd this week category - Thieves steal truck with President's equipment - NBC12 News. God Bless 'em. Any chance in this becoming a trend. I tell ya, this president gets absolutely (as deserved) zero respect.

Daily Index Comparison - You gotta know the NAS is waiting on AAPL. Might be a great TYP trade coming there with a potential sell the news event. 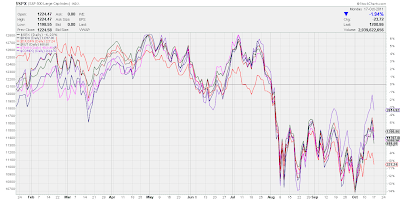 Fr, Ger and the PIIGS - Just something worth pondering - not a healthy chart at all. 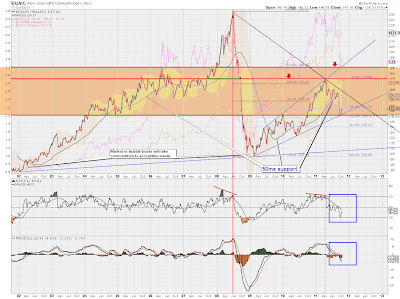 Dollar - Backtesting busted resistance. If things are about to fall apart in the euro zone, this should pop and start heading towards $81 again. It does not deserve to, but that is what will most likely happen. This would not be good for the markets. 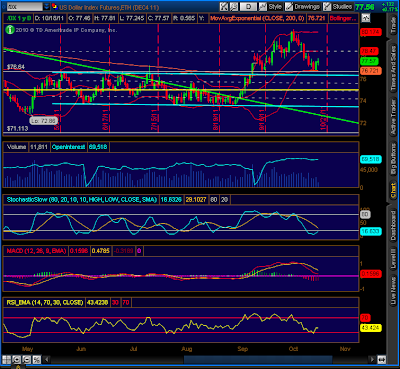 AAPL Monthly - Up for E touch of the wedge and then the world comes to an end? I should do an INTC and YHOO chart as well (with the banks also) Let me see if I can find time today to scrape those up. 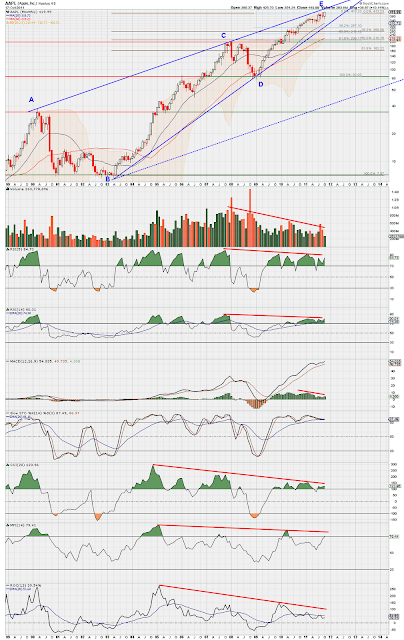 Minis- /es 1m - I don't think this is "it " or "the" move south. I'm leaning to November for that (although it could happen this week with the a 10/23 failure). Then there is the Nov 1,2 FOMC meeting. Then there is the super Com meeting in Nov. then there is Thanksgiving weekend (time for the annual bank holiday rumors there to start popping up). At some point today AAPL will begin to bring some bulls out to support this mess.

STB gave you the 1195 first target yesterday and had sensational results. I was surprised by the degree of the fall yesterday. I was looking for it to happen last night. Either way, you now see clearly in this chart 1195 is now pretty strong resistance. It will be the departure from this 1195 safety net that needs to be observed. STB next two targets are the 1170 and 1145 areas. 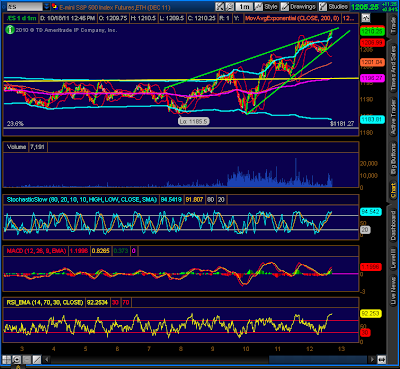