The below video - ANONYMOUS - REVOLUTION 2012 - *NEW *- What are we capable of? 2.0 - YouTube (h/t KD) really hit home with STB. The reason I want you to watch this is to understand Anonymous. Who are these really bad out of control geeks that hack stuff, release sensitive information and cause all of this commotion? That was the impression I was delivered by the MSM till I began using my freedom and the internet to learn and understand their mission and purpose. Then I came to the conclusion of the raw beauty of anonymous.

We are all part of anonymous. Each person fights or challenges the system in their own unique way. It is a raw American principle that is rising again. A simple vote at the polls to replace a corrupt/owned/special interest serving politician makes you part of Anonymous. My posts here make me a part. Your speaking to your neighbors about the financial crisis, GMO's, foreclosure fraud or any sharing of information make you a contributing member. Realize it or not, anytime you share information that addresses a threat you perceive or a political act you don't like you become part of Anonymous.

What is it the globalists and governments despise and fear most? Unity. As we come together, share ideas and communicate, we grow stronger. STB spoke this morning and many times over the past three years on the blog about the wedge that they must drive between the democrats and republicans or blacks and whites. As long as they keep the vote separated we will never control the government. Now is the time to come together, put aside our petty or even real differences and look at the bigger picture. This will be tough, mainly for the self centered Americans that always think 'me first' and have no clue of the horrors happening around them at this moment (yes, I am an American).

Anonymous has declared war on the government. I do not know exactly what that means. I do know that our government is out of control and must be stopped before all our freedoms are destroyed. Whether it be the FEMA camps, indefinite detention, the NDAA, the camera on the street corner, Google or Apple tracking your every move or communication, the police state is growing rapidly.

The debt crisis has thrust us into what I believe is an unprecedented period of corruption and crony capitalism in Washington. The banks are being protected at all cost while we the sheeple are financially fleeced being forced into debt serfdom to pay for their failures. The coincidence between the rising police state and the coming financial collapse is not and accident.

STB does not support or condone violence of any sort, but peaceful protesting and the sharing of information is always encouraged. We must stand up now or face the globalist takeover. The best way to stop the looting and to protect our constitutional rights would be to first elect Ron Paul as president. If RP does not get elected then I fear the worst for our country as we drift further into the fascist state we've become.

This is real folks, it is not an act or fantasy. This country is close to a revolutionary war if one has not started. You need to heed the warnings and information in that video. You need to open your mind to what's going on. We discussed it in the comments today. You have to (or will soon be forced to) cross a mental/psychological line into the unthinkable. You will be forced to realize that things are not all rosy and that we're not recovering and are not going to recover. Your country is dying in front of your eyes. The sooner you grasp this thought the better.

As for the markets, we're on hold till the FOMC tomorrow. Things are really, really bad out there. The illusion all is well being generated by the valuations and statement prints is just that, an illusion. Read the following fact slowly, deliberately and take it all in. After years and years and trillions in "stimulus" this is where we are today.

As US Rakes Largest Monthly Deficit In History, 2012 Tax Revenues Net Of Refunds Trail 2011 | ZeroHedge  "Unfortunately, this number was low: the final February deficit was just released and the actual print is $231.7 billion. It also means that in the first 5 months of the fiscal year, the US has raked up $580 billion in deficits, oddly matched by $727 billion in new debt issuance, 25% more new debt issued than needed to fund deficits... And that in itself would not be horrible - February is traditionally the worst month for deficits as the Treasury sees a surge in tax refund issuance - if it wasn't for something even more troubling. As the second chart below shows, through last Friday, and net of tax refunds, total US tax revenues were actually lower in the fiscal 2012 year to date period than compared to 2011, by just under $2 billion, at $625.5 billion. Which is the weakest link for any argument that the US is actually growing: what is growing is America's debt (now almost exponentially), while its revenues are at best unchanged."

Bothered by that? You better be. We're screwed. I've done rather well holding my tongue and temper in posts for some time now. It may be time for an old school STB rant. I need to let it out, and I have some readers that need a serious wake up call.

Minis 60m - looks like they are set up to fail here. It all depends on the Fed tomorrow. Duck and Cover may be put into effect. Remember if you see a bright flash get to a safe place ASAP. When it let's go this time it will be quick and deep. 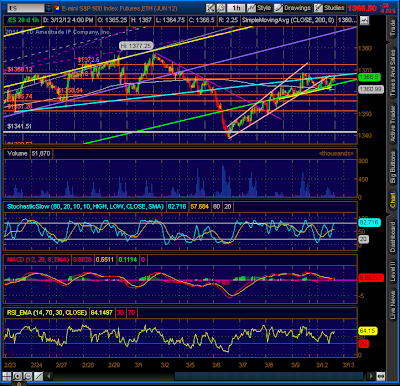 Note: Any Anons out there that may read this - I'd appreciate your comments regarding this post and feel free to correct anything I messed up below. LOL - I've had enough issues with hackers in the past, lord knows I don't want you all coming after me.

Disqus is not seeing the comments that I try to post so it is screwed up. Maybe this post did not make someone all that happy.