It is all about Greece and the markets are getting nervous. It appears very apparent that the PSI deal will fail and the restructuring (that was always doomed, but you were led to believe all would be well) will be delayed yet again. The markets are teetering in the edge of the cliff, but surprisingly hanging on to the hope a deal will be reached (as they seem to always miraculously do these days). Minis are 26 points off the 1377 high and today will generate the first gap down in cash SPX.

"Confirming that the angst 3 days ahead of the Greek PSI deadline is very warranted, we learn that Bingham, which as we noted previously has so far identified and organized a significant group of local law bondholders potentially sufficient to derail the transaction, has now also organized a blocking group of Greek bondholders, this time those holding the country's outstanding Swiss Franc bonds." More PSI Troubles: Greek Swiss Franc Bondholders Organize, Will Hold Out | ZeroHedge

Based on the above it is quite amazing that the markets have not outright busted at this point. The belief in the CTRL-P is strong and the markets simply ignore any bad news (even cheer it these days) as the worse things get only increases the odds for more price levitating easing from the Fed. This is basically the sole reason STB preaches patience and Follow the Fed every day.

Right now you can be easing into shorts, but only with an active exit plan and trailing sell stops. Thursday and Friday will be huge days for Greece and the markets. When the restructuring fails (as we all knew it would except for the pumpmasters on Wall Street) the markets should react violently. Will the CDS trigger or not? Will we get the next 2008 LEH event? Will it become a systemic event? Will it be covered up? That is where we are right now. Funny, you would never know based on price would you. Ahh, but look underneath at the bonds and there you will see reality and the fear.

The Fed right now has apparently had enough of the congress simply spending with reckless abandon and may force some policy moves. Yes the Fed has its back against the inflationary wall and it is now time for the government to become fiscally responsible. This will be a fight to see. The Fed told the EU to go stuff it and you see where they are now. It looks like the sugar daddy is pulling the plug and forcing the children to face their own problems head on. We all know how that usually works out and that's not good. Prepare for some massive showdowns between the Fed, the administration and congress. Remember we'll run out of budget money late this summer (again).

Minis 5m - STB has been delivering the goods with some well placed diagonals. Yesterday we looked at blue support and told you the next stop would be 1355 and then Green support at 1351 support. Well, here we are. The crack of 1351 is a big deal. I was surprised that the purple diagonal did not get backtested and am looking at that as evidence this fall may be gaining some real momo now. Look for 1341 as a major test today. 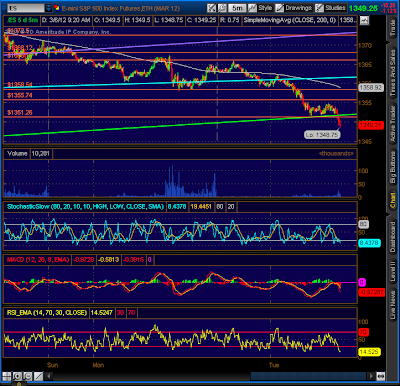 Minis 60m - This chart shows the lack of support below and the gaps that exist. This is your road map should the Fed not surprise and intervene here. this chart does not provide the clues as to when they may step in and intervene and finally launch QE3 that is much lower. The next stop is 1341, then the red (old resistance off the '07 top) right at 1320 (April '10 highs), and finally the pink diag (support off 10/10 1068 lows). 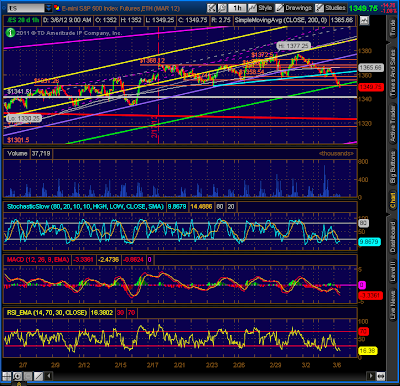 SPX 60m - right now I'm looking at the green highlighted areas 1295 and 1265 as cash targets. As mentioned, I'm looking at two Head and Shoulders scenarios here with this being the top of the head. The 1220 support looks like a good target as well for the target of HnS2 to meet the neckline (where the right shoulder will start) of HnS1. 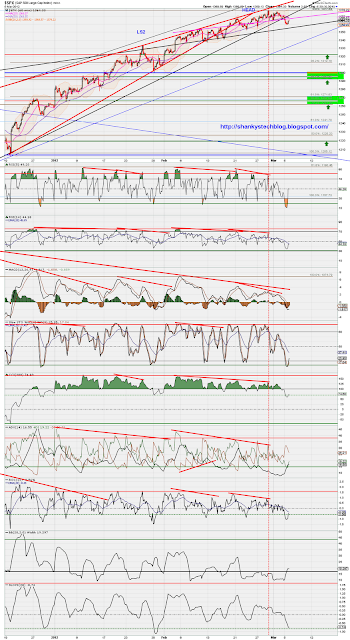 The minis chart looks sick finally and apparently some on Wall St. are not willing to hang around for the bloodbath that should be coming with the failure of the Greek PSI deal this week. I do not see anything other than a QE3 announcement that can save the markets at this point. The only reason I have not called a top now is because of the FOMC meeting on the 13th and the sheer threat that QE announcements and the Fed's MO to protect this markets valuations at all cost.

Last summer STB looked for a fall and then at the right valuation the announcement of a saving QE. Maybe that is the scenario we're about to get. Let the markets correct, announce QE and have all things pretty and smelling good (except for oil) by the time elections roll around.

If you hung in there and were patient, now is the time to take the reigns off. Start to scale in if you have not already but remain fearful and cautious. Have a plan and always use stops.

This morning I suggest you watch (at 10:15 when the markets have completed their drop and pop and then flatline daily occurence) -

Alex welcomes author and leading birth certificate researcher (Harvard PHD former Fed) Jerome Corsi to unveil the latest information on the shadow war for leading up to the 2012 elections. The investigation into the mysterious death of Andrew Breitbart continues, as reports show he had been meeting with Sheriff Joe Arpaio just days before his untimely demise. Breitbart had been poised to release bombshell footage of Obama on the day of his death which he hoped would sink Obama's re-election chances, while Arpaio is pursuing 'probable cause' in a case questioning Obama's birth certificate and eligibility. Obama's Ineligibility Shocker, His Enemies Hit List & More with Dr. Jerome Corsi 1/3 - YouTube

This is a 3 part series you really need to see from the expert closest to the case. This is VERY SERIOUS and REAL stuff the MSM is not covering at all due to blackout.