Guess what? The SPX futures kept rising after hours! Yup, higher high to 1393.25. Nice! NOT! The Fed did exactly what was expected and then JM came to save the party. I want to know what was up with the VIX today. Like some hot chick at a photo shoot - flash, flash, flash, flash. Someone got burned badly. 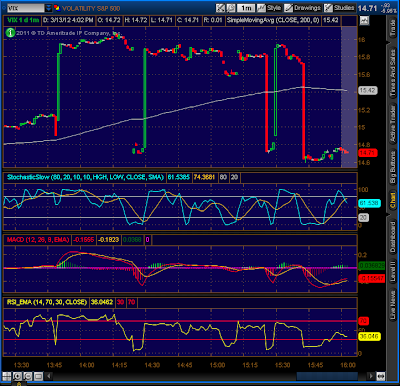 So, there is nothing to report on the FOMC minutes other than their inflation fears are spiking a bit. the big news came in the afternoon when, "There was a time when banks would at least pretend to pay lip service to the Fed. Those days are gone. Two days before the Fed is scheduled to release stress test results, JP Morgan's Jamie Dimon has decided to show the folks at Liberty 33, but more importantly the world, that it is "good enough" and has proceeded with announcing a $0.05 dividend hike as well as a $15 billion stock buyback (in effect increasing its leverage further by reducing its statutory equity). Since we are now obviously replaying the entire credit crisis, from beginning to end, must as well go all in." Jamie Dimon Sees No Need To Wait For Stress Test Release: Announces Dividend Hike, Stock Buyback | ZeroHedge

So that brought on, "Who isn't it turns out are 4 banks that did not pass the Fed's stress test results. These are SunTrust, naturally Ally, MetLife and... Citi. Way to earn that 2011 $15 million comp Vic! To summarize: across the 19 banks taking the test, the maximum losses are projected to hit a total of $534 billion. But at least Jamie Dimon gets to pay his dividend. Also, the European LTRO stigma comes to the US in the form of banks who do dividend hike/buyback, vs those that do not.. and of course the 4 unlucky ones that fail the stress test entirely. Fed Stress Test Released: Citi, SunTrust, Ally And MetLife Have Insufficient Capital | ZeroHedge

So SunTrust, Ally, MetLife and Citi are the troubled children. Everyone else is just fine. OK, sure, whatever you say Ben.

Someone picked a nice time to release this, "What a difference a month makes: back on February 7, the CBO released its first forecast for the 2012 budget deficit. The number then? $1.08 trillion. Just over a month later, the CBO has released its amended budget deficit. The bottom line this time around: an increase of just under $100 billion, or $1.171 trillion." CBO Hikes 2012 Budget Deficit Forecast By $97 Billion In One Month, Sees $1.17 Trillion In Funding Shortfall | ZeroHedge. Of course this is no big deal, right?

I have to digest the charts and figure out if I am gonna call a top here or wait a bit. OPEX coming and EOQ statement prints in two weeks may not like a dip here and could at least influence valuations somewhat. Greece default on the 20th may still be an issue with the PSI settlement problems. If we enter a quiet period of news, the markets may not have any pressure. Of course quiet can be interpreted in many ways.

Minis Daily - Crappy chart, I know. You can't see shit. That is because there are a lot of points in play. The reason I am showing you this POS is that upper pink resistance diagonal that sits near 1420 at this time. I mentioned this a few weeks back as an outside possibility but very doubtful (that was then - I think I have only mentioned something above 1400 once). I also show you this cause there is a purple diagonal that price backtested today. Last week I discussed backtests (as I always do after a diag busts) when I gave the buy 'em call at 1340. I said something like 'you know I like backtests and there are green blue and purple diags and a plethora of other s/r points'. So, we're at a point I could very easily call a top or chose to wait to see if 1420 gets made. More on this in the morning. We're definitely in a 'duck and cover' situation either way. Note" potential 'Shanky point' near 1428 around the 20th. 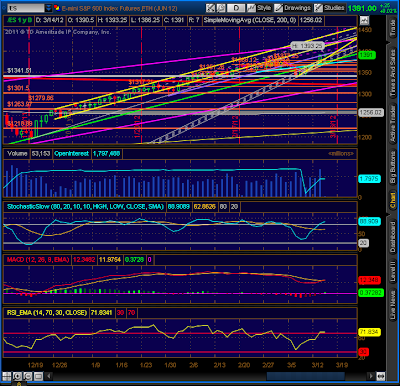 Minis 60m - When you drill into that same chart things clear up a bit - there is the purple diag backtest. There were only 3 diags supporting this last run off 1340 and this was the last option. Oh, there is that yellow channel that we followed for two months just above. You can just see the pink upper diag peeking in in the upper left corner. That candle action is either a really healthy breakout or a giant bull trap head fake. At this time I'm leaning to a sell the news event. You can see what I was looking at near 1379. Glad I held my tongue. 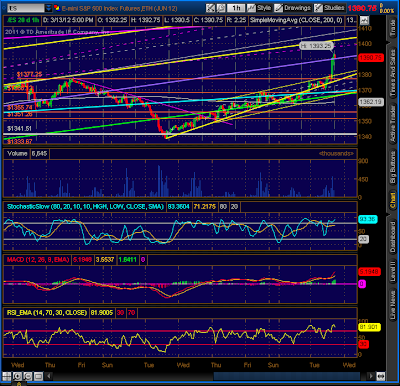 More thoughts on the markets in the morning after I have gone over the charts tonight. All the fibs and targets have changed, and we need to digest this move. I've done so well not joining the top calling, collapse and 3rd wave coming crowd so far. I've been close but never took the bait. I liked 1379 today (for a minute cause that about as long as it stayed there). I really like this backtest. I just can;t let go of the Follow the fed mantra quite yet. Inflation is coming and the Fed already has their back against the wall. Holding QE3 out as the carrrot and having the BLS manipulating or cooking the econ numbers is a huge help. then they have these bogus stress tests that say the insolvent (think unregulated MTM) banks are just fine. When this thing let's go everyone's head will spin and be totally amazed not knowing a market could fall like it is going to. Patience and form and follow the Fed, just like I have been saying all year.