I saw this on ZH, "Markets Under The Spell Of Monetary Easing" Bank Of International Settlements Finds... Same As "Then"  and thought most of you might need a refresher course.

A little something you should know about - These suckers are the worst of the worst and truly control every aspect of anything financial on this planet. Bottom line is we all serve the BIS.

Yesterday this lovely little propaganda piece was printed in Reuters - BIS lays out "simple" plan for how to handle bank failures where "its plan would allow banks to be recapitalized quickly and easily and would allow authorities to give an unequivocal guarantee that insured depositors would not lose savings." That's all good and nice, but printing more money to save insolvent TBTF's is not a real solution is it? I guess when you are this deep into "it" solutions become easy. Actually, I'm not sure why they bothered to make the statement or even need the solution. How can a bank fail in this environment when those safeguards already exist to keep the banks alive in the first place? When fraud and corruption control the system, it's all good.

Now that Wiki post was mostly horse shit and so was the Reuters piece, but they were good primers. You need to read the Wiki and understand who they are. Not even Wiki is gonna outright diss the BIS and spill the beans for what they truly are. These assholes are the shit. Google your way around BIS and discover the truth for yourself. You will find a nice meld of conspiracy theory and conspiracy fact. I've been preaching the prowess of this crowd for years and you need to know what you can about the Bernank's big boss and who truly runs the show. Remember they are not accountable to any government.

SPX Daily - Other than NYMO and S Sto bottoming, I'm thinking you need to watch the level of the RSI. The 25ma gave way last week and it is parked at 50 now which is traditional support, but if you look closely at the green support line I have on the chart you will see where the last three reversal (or BTFD) points have been triggered which is very close. Never mind the persistent overbought conditions, that does not matter in the new paradigm. 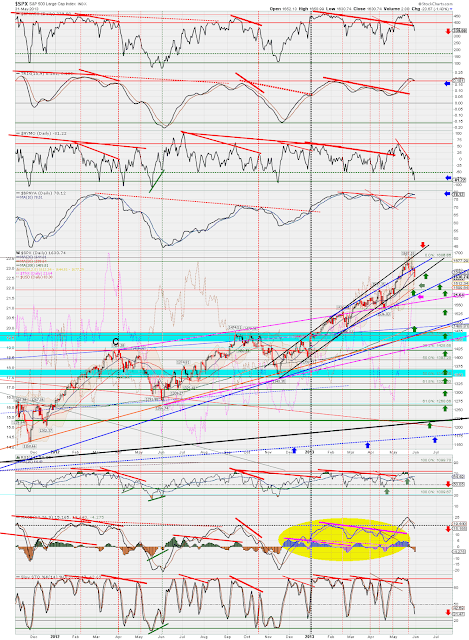 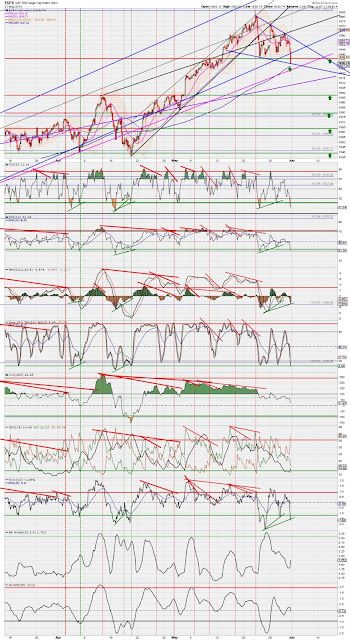 As for the minis and the RS HnS of the larger HnS, let's watch this closely as the launching pad conditions may be just right (for now). Yes, another near prefect short setup may about to be crushed. If the markets should tumble 1600 is a good target, but there is not any fear or news that can make that happen right now and add overbought conditions are no longer a concern. I hold out hope that reality will rear its head, but at the same time we all need to be very wary of what we really want. Why? Cause when this thing finally turns, it ain't gonna be pretty and the destruction that follows will be insurmountable. I don't think the govt is quite ready for the collapse yet, so there may be a bit more time to go.

Not gonna waste much more of my breath this AM. I'm watching Syria and Japan very closely. Spain and the EU are on the watch list as well. The US government is in tatters right now. Bottom line is they remain in total control, yet are losing all control at a rapid pace. That is not a good combination.