I've told you for years to purchase things with cash, especially gold and prepper items - WSJ Report: NSA Tracking Credit Card Transactions, Also Has Access To Phone Records From AT&T And Sprint Along With Verizon… . Apparently someone at the WSJ is ticked at their administration masters and is letting the dragons loose on the powers that be. Conspiracy theory becomes conspiracy fact yet again.

POLITICO is even getting in on the action with Government Source On Why He Leaked NSA’s Secret PRISM Program: “Horror At Their Capabilities,” “They Can Literally Watch Your Ideas Form As You Type”… This is truly amazing, after years of apparently off limits stuff and at a time when the administration is willing to string up anyone for the slightest breach of transparency, seriously damaging press is suddenly en vogue. This whistle blower actually cared enough about the country to go this far? "“Firsthand experience with these systems, and horror at their capabilities, is what drove a career intelligence officer to provide PowerPoint slides about PRISM and supporting materials to The Washington Post in order to expose what he believes to be a gross intrusion on privacy. “They quite literally can watch your ideas form as you type,” the officer said.”" Well, good luck to them following my thoughts form. My handler must have a massive headache every day the way I jump around and bring my posts together.

This is a refreshing change, but one has to ask why? Why now and how, when we all know that the fascist socialist regime truly controls everything? When this administration has literally hammered whistle blowers worse than any administration in history? Why now are they disclosing that they have illegally been spying, storing and analyzing literally everything you've done electronically for years? Are we supposed to run scared? Is the government about to launch a full scale war on its own citizens with all this data? Is some form (outside of the IRS) of massive intimidation coming? Can the press actually report truthful and incriminating evidence against those in power without being persecuted? I have a feeling we're going to find out sooner than later if this is real or just a dream.

Bottom line is this administration is under fire. They've taken the Bush/Cheyney model and liberalized it to the extreme. These folks are way out of control and are finally being exposed for the horror story they truly are. It is no secret that this administration believes it is above the law. Hopefully the law will catch up to them in time, but I'm betting it wont. Why? Well outside of Holder being the biggest puppet of them all, and their ability to use the Patriot Act to enact presidential directives that are unconstitutional at their whim; what could cure all ills and set this administration above all criticism and endangerment? Simple, a war, a really big war. Peacetime a potus can be thrown under a bus, but during a time of war, this will prove to be much more difficult. Remember congress no longer has any say and potus can act now and ask later (Libya) when  it is too late to make a difference. Watch this and listen closely to remind yourself just how little power congress has left -

Well, the STB out of town market fail magic is still alive. The bad news, I head back home tomorrow. I was pleased to see my 1595 target for the minis get hit (well, 1596.5). Not so pleased to have seen the ramp that immediately followed, but we all knew it would be coming sooner than later. The question now is, has "it" begun or was this just another herding of the shorts for another slaughter? We know mutilating shorts is their favorite market fuel.

I guess the question is just how bad is Japan and is the EU about to follow right behind as Draghi yesterday was not so assuring about things across the pond? Some political poker and positioning is taking place for some reason right now. I mentioned in the commentary Thursday I need to digest this move, and I want to give it another day before jumping any sharks. I've learned it is best to let them show their hand and then try and forecast their desires. The other way around is a killer.

Yesterday I loaded up a bunch of charts, so go check them out if need be. Let's take a simple look at the Daily SPX chart and see what's up. Yesterday major support was taken out. Today we got a major reversal off the 50dma and 1597 support to take back the busted lower BB. Oversold is a term that can be used, but (and they are not necessary) positive divergences that can mark larger corrections are not in place. I love to watch the RSI levels (been showing them all week) and clearly you can see the green support line just under the 50 line on this chart. It's almost like this needed to be hit before the reversal would come. If that line goes, she'll travel all the way to 30 before anything positive happens.

The SPX 60m (13/34) chart has a good look at the larger HnS I'm hoping plays out, and you can see the green, what I deem, most likely target areas for a first major move south (if we are at that stage). The move to and reversal off 1597 was a good first move for the bears. Whether "they" simply allowed this or not is till up in the air. Bottom line is it happened. The positive divergences on this chart (along with the ones on the shorter term charts) kinda were begging for some sort of recovery to take place. 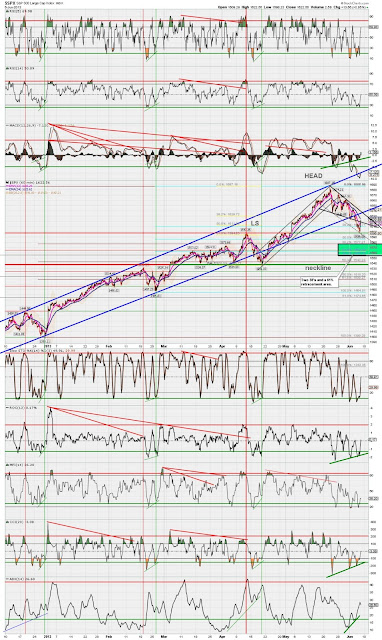 SPX 30m - A closer look at the action - underthrow of the falling possible bull flag or was that just an aggravated move south that's retraced and is gonna turn south here off the move back to the 22 area? Is that wedge real or is some sort of larger formation still in the making? 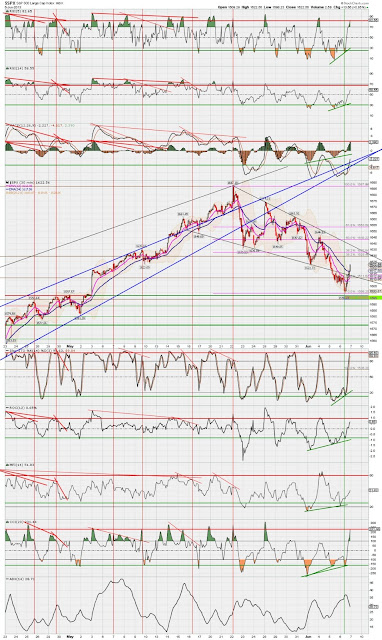 Employment in the morning will be a headache I suspect for the bears. Will bad news remain good news or will good (falsified) numbers be bad? Who knows. I'm pretty sure about 10:30 ZH will post a Nanex chart with the early leak ramp or bust info we've all come to expect. Lots of questions remained unanswered, and I'm still horrified of going against the Fed right now. All sorts of easing talk could hamper the bear's party if the news is bad in the morning. Next week I'll show the past tops and how volatility increased greatly around those points. Let's not put any carts ahead of any horses quite yet. I'd appreciate you opinion above in the question section on whether the top is in or not. I have not called one yet.

I'll be in this morning, but then traveling for the rest of the day, so hold down the fort. I hope to be on the board before the close. Hold down the fort. It could be a wild and woolly day especially if this thing breaks down in the morning. I still like the 40 area on the minis as a retrace target, but that may be a bit high. Not sure, I still have to digest all of this before jumping back in. One thing is for sure, DC is losing control of everything at a rapid pace and that could lead to more red on the charts. Let's hope so.