One simple rule - No QE = No Market. I'm not sure how they intend on managing this crisis, but it looks like the market crash before the war to cover it up STB scenario could be coming into play. The STB vacation crash scenario is also in play as well.

Let's review - I wanted 1595 off the top, at the low 1640 was the retrace with 51 as the bear's last stand, a final move to the double bottom, an ABC retrace and then poop. We're at the poop stage. The tug-o-war that has been going on for the past two weeks may be nearing an end. The bulls just had a dramatic bullish setup fail in their face. 1596.5 is the low number we need to be watching. The sell stops are not far under that point.

Minis 60m - This is pretty much it. This is the dividing line between bull and bear control. Changing charts to the travel computer here, two major support points just busted. The white channel backtest and the green LT diag support just cracked. This is a moment of great concern. The PPT is on full alert this moar-ning. 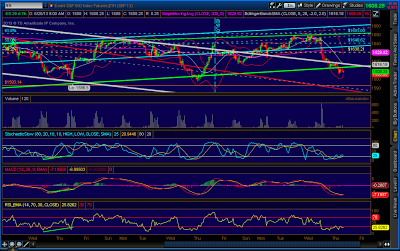 Minis 4hr - Awful chart for detail, but it is here to show you the massive supportless area below price here. I may rework it a bit since I have not used it in a few weeks. Remember I am hoping for a larger HnS to set this top and have been looking to the 1541 area as a neckline. This computer says that could be as low as 30. If that fails and price just tanks, so be it. I won't complain one bit. Your lower numbers are 93, 61, 30 and 1485. I still like the HnS as the PPT and the CB's should fight back at some point and go for one last short squeeze. I have warned for some time of increased volatility nearing the coming, if not set, top. You are getting that now and it should continue. 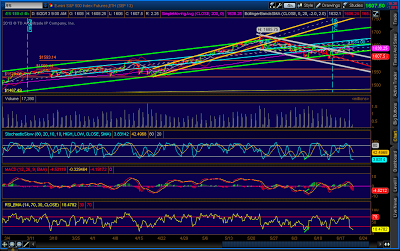 The bulls (not you RL) are retarded and they only see one direction. There is a slight chance they make one last run at some point. Never forget they are in total control and everything is centrally planned. Never forget that. Nothing is real, nothing! Always keep that in mind. It will be real one day when they lose control, but till then expect the unexpected and trade accordingly. Do not fall in love with any one position and believe there are any sure bets out there. Babysit everything. With the taper they will have to become even more creative with their ramping techniques and I assume method numero uno will be the short squeeze. So be careful and wary to that fact.

SPX Daily - Blue support should crack after the open. That may take out the 50dma as well, so 1618 is the first wall that has to go. Then there is the lower BB at 10, then black support at 05 and then nothing at all to  the 38% retrace near 1520. That is a massive hole and trust me the central planners see it cause those meatheads created it.

Let's remain calm yet again. Dire times abound, but everything is under their control. You may be witnessing a glorified Hollywood script being played out. This is a new paradigm, central planning, get used to it. I do believe that one day history will rule and natural forces will take down the system, but till then you must remain patient and play their game.