We charted it up pretty good in the commentary yesterday, and I'm a bit burned out on railing against the police state right now. For those reasons (and I'm on my summer schedule) we'll keep it brief in the post and as the day goes by the detail will flow in the comments section (which is what you really need to read anyway).

Prolly the scariest thing I pointed out yesterday in the commentary was this chart on oil. Without going into any detail, which I doubt you need, my theory on a war coming sooner than later cause of market conditions and an administration in deep need of some serious cover could be reflected in this chart. TA has mysterious ways of predicting these things. We've been watching price consolidate in the green wedge for some time now and that is about to end. Price has been cooped up to long and will be looking to go somewhere sooner than later (and we all know where the elite want it to go). What a better way to end this scenario than with some real trouble in the MENA region. 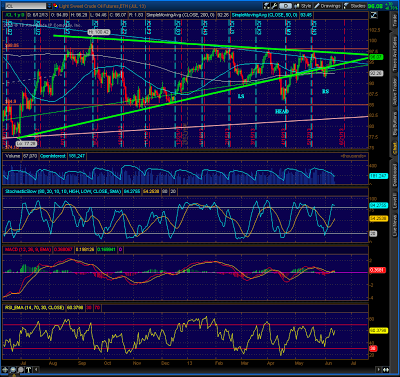 Minis 60m - IHnS neckline at 44, 61% retracement at 51, green upper channel resistance here at 37 and pink channel up 50% diagonal all right here together. If not a IHnS then a possible CnH (Cup and Handle) could have rolled in. 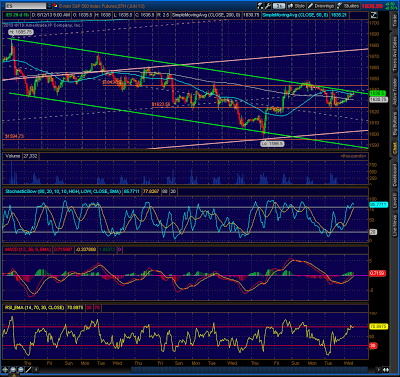 SPX Daily - Bangin its head on all sorts of stuff here. RSI hanging right on that support line. If that goes so does the market. Pretty tedious point here. Fed running out of time as the bears have proven themselves willing and able to bring this thing down a notch if need be.