Minis off 14 and Japan in the picture again. See what happens when you cut off the hopium and now you know why the Fed will never stop easing. Greece needs another bailout (which intrinsically means someone  - or everyone - else in the EU needs cash in a bad way cause we all know that Greece is just a flow thru conduit to the rest of the banks). If history is still any indication the bond markets around the globe are telling us something is wrong (again). With the UST's at 14 month highs, the boat may be listing again. One has to assume that Spain will come up for air sooner than later.

Add Syria, Turkey, Iran, Iraq, China, Russia and a plethora of other country specific issues to the above. Throw in the administration's corruption issues and you get a quagmire of crap all swirling around at once. I'll ask again, how long can they keep the juggling act going before they start dropping a few balls?

SPX 60m - STB had been discussing the 51 level, the 61% retrace, the backtest of the 20dma and the channel backtest as a point for the bear's last stand or else. Well it appears that Japan gave them the reprieve they needed at just the right time as the BTFDers are taking it up the backside this morning. Wonder how that feels? Wait a minute, as a bear I know all to well how it feels. Glad to see the bullys getting some of their own medicine. I'll have to look closer to see if the lower gap got filled. They conveniently left an upper gap this morning which all bears should notice. Other than all the resistance mentioned, the only clue this was coming was a turn in the MACD hist (which is always one of my fav early signals). 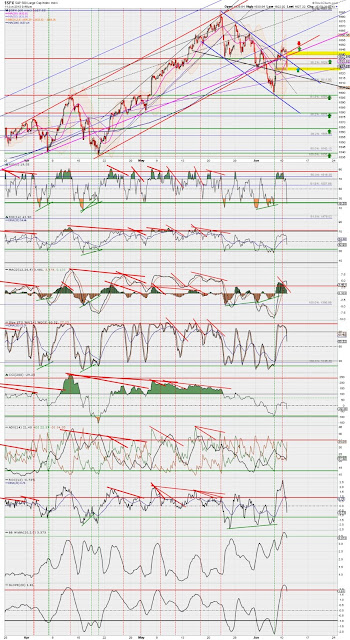 Minis daily - Nothing to get excited about till the lower pink support and the 50dma get taken out near 1605. The, then we can start talking about some serious downside.