I'm not going too deep with the post for three reasons -

1) The government is in deep shit and is getting ready to crank up distraction central. War, false flag, you name it they need it and more right now. With the G meeting this week and the revelation of us spying on G members at past meetings I'm totally sure global cooperation will be at new highs since our NSA knows the most sensitive details of each attendee's most private conversations.

2) The Fed meets this week. See more on this below.

3) The market is in a most precarious position technically as I showed last week and in the Open Weekend Post. Price's ominous predicament is a big deal, but that really does not matter cause the only relevant thing that moves price is taper talk. And what's the skinny behind all of that? Well, the Fed can't artificially levitate markets and keep rates artificially low printing $85 billion or more per month forever all the while their "mandates" are failing one after the other.

Denninger has a good post where he concludes, "This is not because Bernanke wants to stop (QE).It is because he has to.The math says so, and he knows it." But we all  at STB know he can't, or else. So as we've been discussing forever, no matter which path they choose they both lead to the same dismal result. Remember a few years back when we used to have "math" lessons and proved things will never work?

I suggest you take a look at bank confidence around the globe. I'm pretty sure confidence in governments globally is a bit worse. So why is nobody doing anything about it? Why the paralysis? Let's not go there today, you know exactly what rant I have on that subject.

SPX Daily - Same thing we've been looking at for a few days now. Red LT chan support is gone, then blue and black support are in play with the 20 and 50dma's with the lower BB. Note the RSI support line I have drawn. Something has to crack one way or the other.

Minis 4hr - Same chart from the Friday close. Pink channel up support and green channel down resistance. Price is being pinched between pink support and green resistance. Something has to give and in either case a large move in one way or the other is coming. All I can say is pay attention to the taper and war talk. I thought the crash would come before the war, and the war would act as a distraction. they may happen simultaneously. 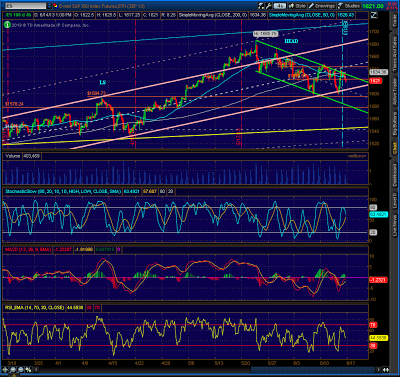 As usual, moar to come below.