So AAPL has a massive miss and we're not falling off the cliff. I guess when every hedge fund is up to their neck in one stock that's what happens. No one bailed. Should they have? Of course not, with the 'promise' of another Bernanke Put alive and well (at least for one last round), why should they? Hilsenrath Once Again With The 3:55 PM Sticksave | ZeroHedge We remain in a bad news is good news world with every bad data point released the markets only react with glee as the promise of another trillion hits of market levitating hopium is doled out.


Yes, another dose of SSDD. Yes, the markets are 50% overvalued. Yes, if things were real with the data points of the past several months and AAPL's miss as the cherry on top we should be facing a lock limit down open today. IT is what it is folks. You invest in a market that is 100% manipulated and controlled. We have evolved from what was once possibly the fairest market on the planet to one that rivals if not surpasses that of China, the most corrupt on the planet.

Funny, we break major support (two of them) yesterday and get the AAPL miss after hours and the futures are green? Well all but the Q's, welcome to bizarro world. IT is what it is folks.


Minis 30m - A bit busy, but I need all of the lines. Yesterday I drew up this new red falling channel that I am watching. Channel support held at 1333 s/r and now the backtest of busted wedge support (yellow) and the critical 1341 level appears to be in play. 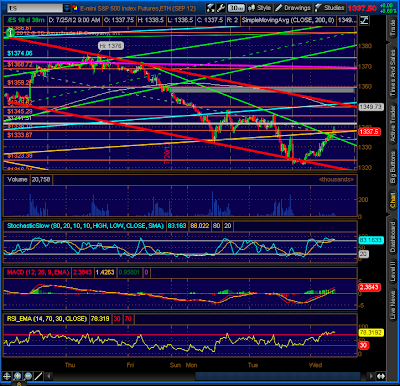 I really don't have much else to offer. The minis double topped last week, fell hard, finally took out all of the support on the rising wedge and major support resistance at 1341, AAPL missed and the futures are green - go figure - today we should be falling off the map and we are not. Well, not yet anyway, let's see what happens as today develops. The technical set up is so bad that only the PPT and some serious easing (Hilsenrath) rumors are holding price up at this point.

We're there. They know it. You know it. It is just a question of what does the Fed need to do at this point. Do they ease here or do they let it fail and then ease? They will ease again, they have to, there are no other options. You know it's true and unfortunately (for the bears) the market knows it as well. It is no longer a big secret (except to the ignorant sheeple with all the 401k money) to anyone that easing (or the rumor of) drives everything. Lord help us all when they run out of bullets.

I really don't have any special charts to throw out today. Everything looks like crap and we're testing the SPX 50 dma support at 1332. If that fails, watch for the sell stops to trigger and then jump on for the wild ride south.

As usual, I'll bring more charts and goodies in the commentary and to twitter as the  day goes by.