Extending and pretending is painful for those on the side of reality and a never ending party for those hooked on the hopium. Sometimes it really sucks being the responsible one at the party. Staying sober and watching everyone else run around making a fool of themselves isn't all that much fun. That's the bears case right now as they sit and watch the bulls, high as hell Mexican party hats and all, running naked thru the streets like there is no tomorrow. We all know how this is going to end right?

So we wait on yet another summit to produce nothing but empty promises and more bailout rhetoric which generates nothing more than a waiting period to the next summit. The cartel is running out of options. Insolvent banks and governments are left without any collateral other than raw taxing power (governments and banks are now one unit if you had not noticed). So, they throw the bill for the hopium fused party right on your back and mine. Were we invited? Hell no, but we get to foot the bill.

As for the markets, it is becoming increasingly stupid to even discuss price movement. I mean, what's the point? We all know that price reflects nothing more than the promise of more easing or bailouts. We all know that without intervention that the markets would be valued 50% or less than where they are now. What recovery? It is all an illusion that all is well and your wealth is safe.

For the past several months I have been discussing consolidation. Well, that has turned into a BS mini ramp and Friday finally took out my upper resistance point at 1375. Welcome to an area where nothing can survive on its own, meaning without real sustained intervention price is now at a point where it is most fragile. This is the rarefied air that is oxygen depleted where nothing can survive without serious intervention.

Minis 4hr - The key this morning is the minis backtest (what once looked/seemed totally impracticable and impossible) of the neckline of the  head and shoulders breakdown back in April (heavy green). From here to 1409 is some serious resistance. Team Manipulation managed to take out 1341 and 1375 to my dismay. Let's see what they have left in their bag of tricks up here. 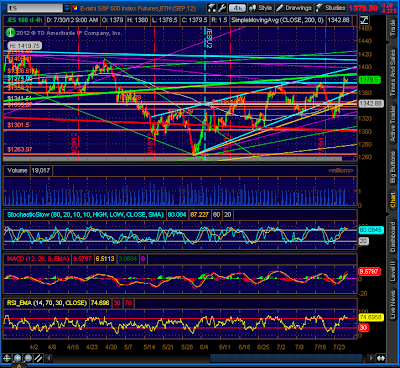 SPX Daily - A few weeks back I mentioned confusion surrounding the charts. They were ready, but not ready to fall. Well that confusion served me well as a warning that the fruit on the Bear Tree was not ripe yet. Well, we're closer now with some of the important but fringe indicators (bullish percent, CPC and SPXA50 to name a few) are starting to help the fruit ripen. We're getting much closer to a really really really nasty setup for a fall. 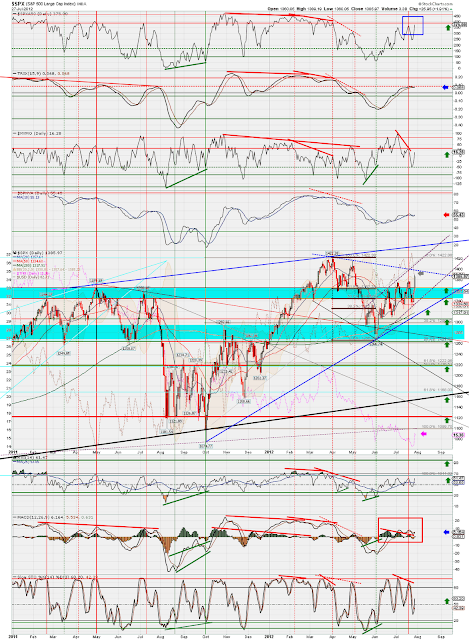 Patience and follow the Fed folks. The turn is coming.