I asked the board if anyone had a queasy feeling about things yesterday afternoon after the 10yr auction. (Tomorrow is Friday the 13th) Response was muted. I suspect it was so because of the confusion the results the sale generated. I noted since the weekend that I had been a bit confused as to what the charts were saying vs. what I was seeing/feeling. It is rare I have a hick up in my prognosticative abilities and usually when that happens the balance of the investing universe is not right.

Let's review TD's write up about the 10yr auction yesterday (read this twice please to let it sink in), "Only one word to explain the just completed 10 year reopening auction. WTF!!! While the 10 year When Issued was trading at 1.516% at 1pm, when the release hit of the final High Yield on the bond,jaws dropped, as it came at a shocking 1.459%, nearly 6 bps inside of the WI, a record, a yield which also was a record, a Bid To Cover of 3.61 which was the second highest ever, second only to the 3.72 in April 2010, but it was the internals that were the most jarring of all. Unlike all recent auctions in the past 4 years, the Primary Dealer take down was only 14% a record low in recent years, and a hit rate of 6.8%, another record low. The offset: Directs, which took down a whopping 45.4%, another record, after tendering a record $16.9 billion in bids. All in all there was no definitive reason to explain why this auction was so very, very off the charts, and so mispriced by the secondary market, suffice to say WTF, and that this is what happens when there continues to be just one game in town: frontrun the Fed!"

The 10 year auction is bringing flashbacks of the tops in 2010 and 2011 when I made two of the best top calls in my brief history. Many things are different this time. QE is not ending, Twist has been extended and the Fed's tool box remains "open". They are no longer experimenting with pulling liquidity from the markets. They now face the cold hard reality (three years into the Keynesian nightmare) that their uber debt expansion experiment is a great failure and are now willing to throw anything at the wall to see what sticks (after it has hit the proverbial fan).

So things are bad here hugh? Now let's look across the pond. The risk on move (ZIRP) from the ECB is so far a failure. The MSM and propaganda heads are spinning it as a move to spur lending while in truth it is meant to force a risk on mentality wether in the EU or here. Remember all those bailouts in the EU where the funds were printed by the ECB (well, that's what illegally or unconstitutionally happened in reality), given to the governments and then simply deposited right back at the at the ECB before the ink could dry on all those digital euros? Those funds needed the safest place they could find to rest (where else but the source).  As Zero Hedge notes, "Either way, Europe's ZIRP is finally being felt, only not in a way that many had expected and hoped and instead of the money being used to ramp risk, it is further accelerating the divide between risky and safe assets. Look for the Direct take down in today's 30 Year auction: it could be a doozy."

Now let's look at the minis daily off the top. Sorry the chart is a bit messy, but I can't clean it up just yet and in a falling market I must expand it to show the bigger picture. What you need to see is the falling green wedge off the 1419 top and then the rising blue wedge that is beginning to fail right now. Note the 1374 top that was all I was willing to give this rebound. Note the 1341 level that I have ID'd as critical for well over a year. Note "Big Red" the diagonal that is support off the '07 and '11 tops that sits at round level 1300 and just even with the 1301 s/r point. Note the 1263 level and the gray area with the open 10 point gap that acted as support of the last fall. I also ask that you note that this not so happy price action has happened in a low volume environment that is usually reserved for ramps not dumps. 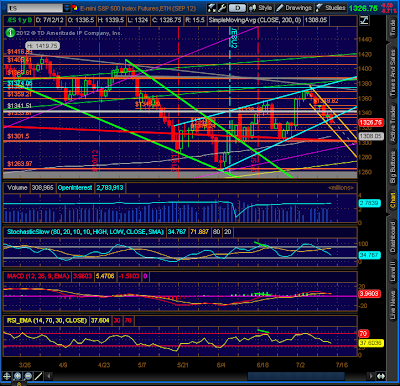 Now let's drill down to the yellow channel and this morning's crack of the blue wedge support. I've pretty much walked you down this one. 1341, 1333, blue support near 1329 and here we are pausing at 1323. I can't deliver any better folks. 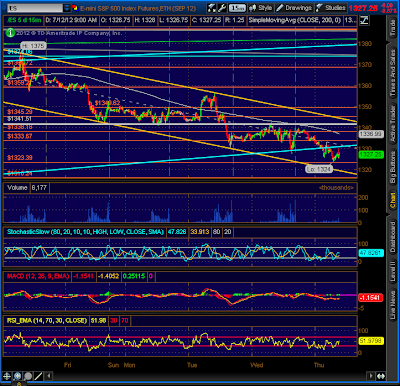 Now let's look at my BTFD/STFR chart which is my moneymaker. This chart has been screaming sell while others were mired in "everything is not so bad and prices could still rise land". The results of previous similar set ups have not been so good averaging 155 point falls from these conditions. That avreage just to happens to hit my first "most drastic" target of 1220 not too far above my long held 1170 target. 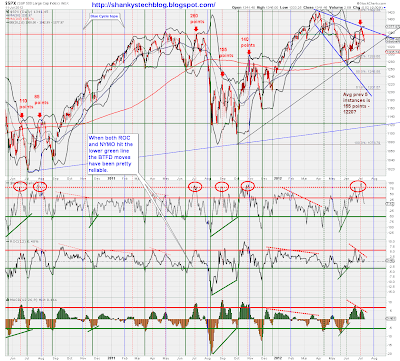 Now lets look at "the one big deal". The Monthly Cycle Chart tells the best story to me. This one is so clear even the most ignorant of the sheeple should be able to understand it (that may be stretching it, but it sounded good). Other than the clear as day cycles, the one thing you need to notice are the black circles where the 10 and 20 ma's cross. Note how accurately they determine points where you need to haul ass and run for the hills. Note how we came oh so close (within 1.5 points) to a death cross on this chart. The only thing that saved it was the recent blue rising wedge (seen on the minis chart above) caused by the hope that the EU summit would deliver the silver bullet that would kill the debt monster. HA! That's funny! NFW is anything going to kill the beast that they created but its self. 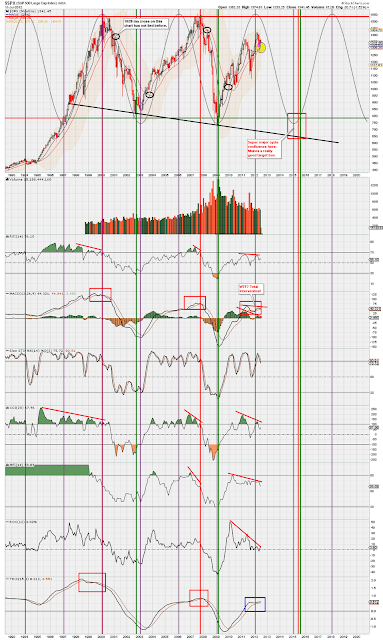 So, here we sit on the cliff again. Are we about to get the (must have in order to be able to ease) fear fall? the April thru July periods have not been too kind to the markets in the past have they? I proposed a new head and shoulders formation yesterday that could happen on the minis. A drop to Big Red at a 1300 neckline and then one last possible backtest of the 1341 mendoza line would be a great setup. Target 1225 right near my first big drop target where the Fed will finally quell to the QE screams.

Let's see what happens. All I know is things look rather dire here and it may be time to duck and cover.