Is Silver About To Explode or Implode?

After reading South American Silver Plummets As Bolivia Announces It Will Nationalize One Of World's Largest Silver Deposits from Zero Hedge I decided I better follow up on my April 24th Silver post where I recommended you stay away from silver (then at $31) till upper green resistance was busted and had a backtest.

Let's get to it since it almost nut cuttin time -

/SI Monthly - These charts change very slowly, but offer a wealth of information on direction and long term support, resistance and trends. Here you can clearly see long term resistance (pink) and long term support (yellow) with some major s/r points sprinkled in. You can also see the green channel down from the $49 top that has dominated price since the reversal. 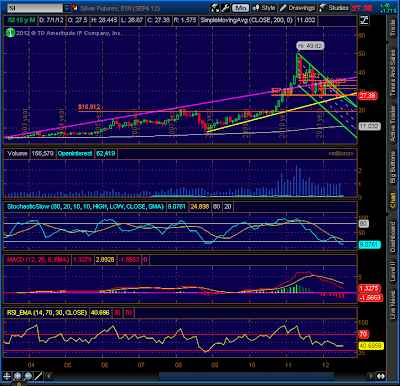 /SI Weekly - Here you get a better look at the green channel driving price back under pink LT resistance and into yellow long term support near the LT $27.50 s/r area. Note that some may see green resistance falling into $27 support as a descending triangle (which is not good, but those can break out you do know). I doubt that is possible cause the target for the move would be near 20 points and that ain't happening. 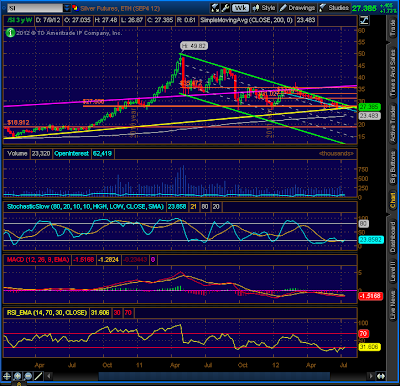 /SI Daily - continuing to drill down into the chart. Other than the failed breakout at the point pink meets green channel resistance (which STB called as a fake out at the moment it happened you can check my twitter for that), you can clearly see green upper channel resistance driving price down into LT yellow support and price bouncing around $27.50 LT s/r.  Near term blue support diag can be seen in this chart as well. 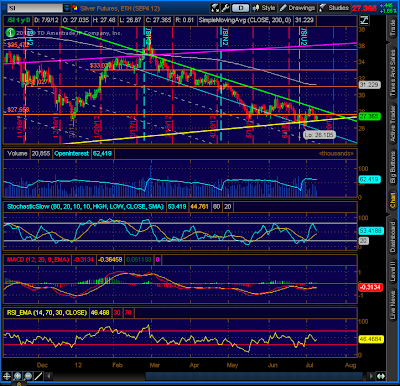 /SI 4hr - And now you can see the real reason silver's price has been so range bound the past month. The wedge formed between green resistance falling and yellow support rising has dominated price at LT s/r. Pretty simple. 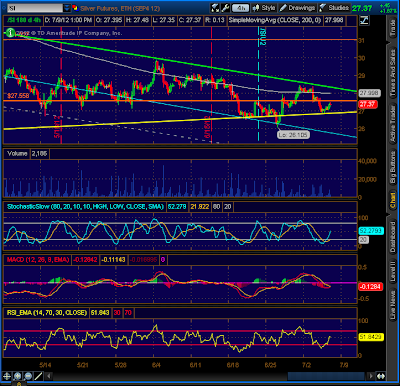 So, that get's us to the ultimate question, what gives? Does silver break out, hold yellow support and take out green resistance? Does silver fail and maintain the green upper channel resistance and crash through LT yellow support? Maybe the question is what does JPM want or need for price to do here? The intersection of green and yellow is August 1st, so the charts indicate something may happen soon. 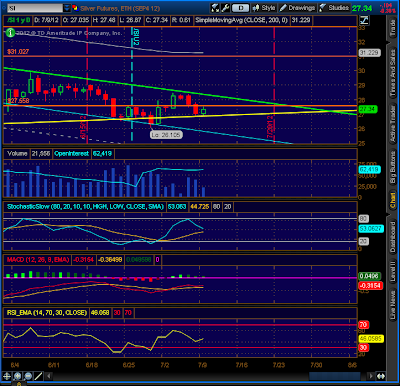 IMHO - Monthly the indicators indicate the trend is still down. Weekly the indicators appear to be embedding in oversold territory, but do not have any telltale divergences saying price wants to rise just yet (except for the MACD Histogram). Daily it appears that the $26.10 low was all she wanted and price should continue to trend up or maintain at least.

There is a massive hole below $27 support down to near $19. It took all of three months for price to explode 50% back in 2010. If support here goes, that could be taken back quickly. In the other case there is a hole as well, but to $31 on the upside. Note in an extreme case pink resistance is near $36 at this time).

What I'd like to see here (being a long physical person), my perfect play scenario, is a near term breakout of silver above green resistance to possibly near $31 and then backtest the busted green diag at the $27 support intersection with yellow support (STB Point) at the beginning of next month. At that point, I would be a big buyer.

I don't really see a breakdown below yellow LT support happening for a gazillion reasons, but in these manipulated and controlled markets (with at least one major CB rooting the short side) you never know. What I suggest it that you remain sidelined from additional sales or purchases (physical or paper) till the s/r consolidation is resolved. Some large trend questions will be answered by the end of this month and you really don't want to be on the wrong side either way.