It's become like the movie Groundhog Day except the global distortion continues to worsen with each trip down the rabbit hole. The deeper we go down the hole the more troubles that arise, the more the unregulated, fraudulent and totally corrupt system exposes its self. They system is finally starting to turn on its self as the underpinnings of various rigged markets become undone. With each year the debt grows and the economy worsens. Things are not getting better no matter what you have been told. From green shoots till now, everything you have ever heard about a recovery from anyone has been a lie.

This Is What Happened This Time Last Year After Ben Bernanke Spoke To Congress from Zero Hedge has this excellent observation, "A week after Bernanke spoke last year we saw the highs for H2 2012 (1345) before moving aggressively lower into the low 1100s through August- October as Europe’s problems intensified and the US debt ceiling problems came to a head. One year on and the biggest H2 risks are probably similar. US data is weakening, Europe’s problems could easily come to a head again and the fiscal cliff could become a major issue, albeit slightly later in the year. We also now have a China slowdown to contend with. So the parallels are there."

This situation can be applied to the Jackson Hole meetings, EU summits, or any other annual financial event. The markets now move in relation to news only and rarely any sort of fundamental aspect. Real or not (most is not real) that markets soar with news of bailout dreams whether hysterically impracticable or unrealistic. The best example of this was the recent FOMC meeting market levitation chart that went viral noting that probably half of the growth in the major indexes was due to easing speculation ahead of the FOMC meetings. Someone, not sure who (wink, wink) has a bitching FOMC meeting chart they have been showing for well over a year noting the critical turns that have occurred at these meetings).

Bottom line is the markets are unraveling while at the same time the desperate moves the elite use to react to the growing threat to their financial dominance only change in rhetoric and size. Their only silver bullet is to print to save the global Ponzi.  There is no solution. It is only a matter of time before this skipping record (the old vinal type) falls off the turntable and crashes to the floor. In the meantime, expect Grounhog Day to keep on repeating till it doesn't.

Minis Daily - Off the 1419 top the patterns are very clear. Falling green wedge to the rising blue wedge we are currently in (and trying to crack). We recently had a yellow channel down inside the blue wedge and are currently breaking support of the small rising green wedge. All of this is occurring under gray resistance diagonal off the 1419 top. The key levels now are 1374, 1341, 1300 (Big Red) and 1265. 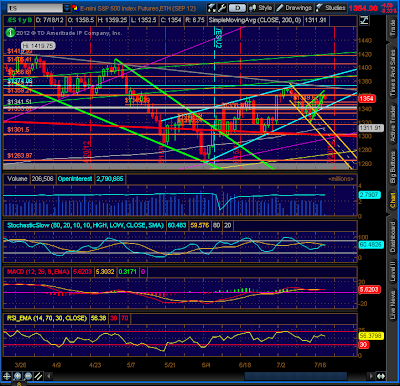 Minis 60m - Yesterday I noted the 60m chart looked pretty cooked. The markets tried to work off this overbought condition but were not allowed as the PPT was not about to let their boss the Bernank be shown up by price. I thought all of the consolidation action over the past two days would occur above blue support but under 1341. Instead it happened just above as price (hopefully) works its way towards the 1341 intersection with the blue support diag (STB point). You all know I'm rooting for a touch of that intersection this morning, but I am willing to accept the move yesterday as a close enough (in the game of hand grenades) call. That is just another predictable point that this wedge has produced. the problem is that with gray resistance driving down under 1374 now those predictable points are starting to run out. Note the pretty severe divergences in the indicators. 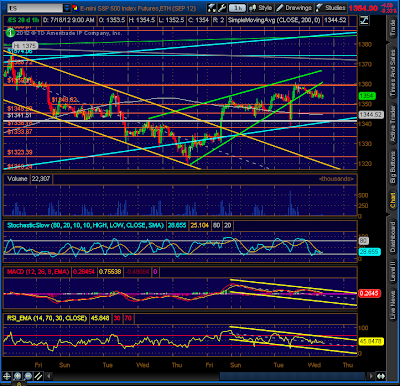 1341 and blue diagonal support are a pretty heavy combination just below. If that cracks then 33,23 then 1300 are in line for the fall. I'll be waiting on the Bernank again today and see how things react. Based on yesterday's action things appear to be weak, and if a move south should occur it could be sizable and last a while.