This market action may remind you of being in a long line at an amusement park like Disney. Going nowhere fast is about all you are going to get. To add to the misery, what promise does this ride you are waiting on hold? Of course you have heard all the rumors and hype, but will it deliver? Adding to that misery is the fact that when this ride is over Friday you get the pleasure of moving straight to the next attraction where the line will be equally as long and painful next week.

Of course the line we're in now leads to the EU roller coaster. It takes you on a wild up and down ride thru Italy, Spain, Greece, Germany and a host of other EU countries. The scenes are contentious at best. Poverty, culture and government clashes, massive debt issues and what ride would not be complete without the scene where the big banks glorify themselves. Some say the ride is not nearly as pleasant as it was before the remodeled it back in 2008.

The next ride is the FOMC express. Known as the fastest coaster on the planet, this ride is famous for taking you to great heights and then dropping you like a rock off a fiscal cliff over and over again. This one scares the hell out of you. The scenery is similar to the EU ride, just the action is far more extreme.

So we wait, again. What will the EU do? Illegal bond buying by Draghi (but who cares about small details like that) is about their only hope now. How they will print (illegally again) or how much they can print is always a good question? I guess the most exciting part of this wild ride is trying to figure out how insolvent and debt ridden entities can print money out of thin air to save a collapsing economic system. Germany appears to be yielding a bit from their non Wiemar stance but not much. The suspense should be exhilarating all week.

Can they punt to the Fed? I don't think so. They have been told to right their own ship, and that is what they must do. Now that does not mean that the american taxpayer Fed will not be an active part of the solution if there is one this time. Remember these meetings have a long history of delivering nothing. These folks are going to have to get very creative and the solution will stretch legal boundaries (but again, who cares at this point).

Hilsenrath and the Fed cronies will be super busy over the next two weeks as well. I would expect that if the news in the EU goes sour, you will immediately get an easing rumor out of the MSM here, and Mr' Potter will be waiving his wand "leviosa" at the markets.

So we wait. Watch the spreads in Europe, the euro, the dollar and the bond yields here for the real story. Pay no attention to the markets. Bonds will cue you to reality and the markets will only mislead you. Also note that if you hear the words "CDS default" you should become very concerned (much more than normal).

I will share a couple of headlines this morning. From CNBS you get the hype right out of the gate. The Pavlovian reaction to modern economic policy (yes, this is what we have devolved to), China's Growth Weakens, so When Will Stimulus Come? Any questions folks? Let me sum it up for you. All is well and they will simply print more money if something bad happens. Congratulations, everything economic and financial these days relies on the old 'but there are still checks in the checkbook' mentality.

Apparently some of the populace are cuing in to the dire circumstances. Mutual fund flows here are (and have been) negative for some time. People have been pulling funds out of Greece like mad. In Spain you get a capital flight that is worse than in the Asian financial crisis. So where does reality lie. I'd say the people suffering and running for the hills is quite the contrast to the long line of shit the governments are feeding you.

We're close to the cliff folks. The charts have been ready for a few weeks now. All we need now is a catalyst, something to force the ride off the rails. Over the next couple of weeks you will have plenty of catalysts, but you will also get the Bernanke put and the never ending promise that more easing (regardless of current debt levels and if we can (we can't) afford it or not) will cure all.

It should be a wild couple of weeks. Oh, and then the election. Also, don't forget that the US is scheduled to run out of money again very soon.

I'm not going to deep into the charts, cause there really is no reason. When the time comes I will deliver. If you want detail, go to the chartbook or to the last couple of weeks posts. Nothing has changed. they are primed for a major top.

Minis 60m - The thick blue falling diagonal is upper market resistance off the top in 2007. Price is apparently stuck in a battle this this resistance. The thick green diagonal is/was the neckline for the last big head and shoulders back in march. It is acting as support here. The rising blue wedge support (original formation off the  July lows) has broken down. We don't need to discuss any serious downside action till 1374 is taken out. 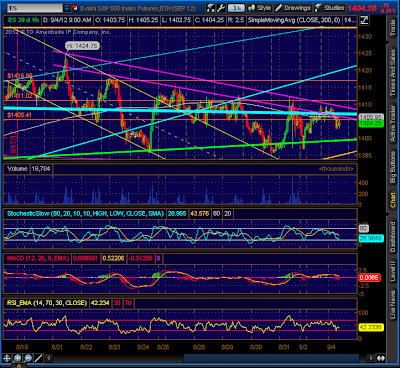 As usual, you will get detailed price action from me below in the commentary along with the core commenters providing trades and pertinent news flow.

I hope you all enjoyed your long weekend. Have a great week.