Let the posturing begin. Here we arrive on this historic day where one of the greatest tragedies in global history happened sitting on the doorstep of the next potential tower tumbling event. That "event" would be the German court's vote to move on the EU bailout situation. Now let's not kid ourselves, either way this "recovery" is going to blow up in their face, but a nae vote from the German justices would hasten the process.

Odds are very good that the ECB will find a way around a no vote (which would be prudent) if one should happen and continue the farce that is the global printing bonanza. Legally or not they will find a way to continue to kick the can till something literally breaks. One thing for sure is that this court ruling will have a definitive outcome. It will be real unlike every EU meeting prior where decisions are never made and only promises that "all will be well" are delivered.

So, tomorrow we have a HUGE day up or down and then we drag in the clowns from the Fed. You know that I hate to speculate on what will or will not happen. I believe it is a waste of time. My only suggestion is that you let them play their cards before showing your hand, and that includes waiting on the Fed's moves from their meeting this week. They will have the luxury of teeing off last in this group knowing if they need to pull out the driver or not.

I will speculate on one thing, that is if the German's disappoint and the Fed eases. This will most likely cause a massive rush into US equity markets. If the Germans vote no and the Fed does not ease, the fall should be dramatic. We all know that can't happen prior to an election, so at this time I expect more rumors and promises but no solutions or real action.

Remember that congress is back in session and DC should start rumbling very soon.

Minis 60m - I have shown and been discussing the 1432 resistance level from 2007. That is the yellow s/r line on this chart. Yesterday the 1432 level and the upper blue wedge resistance off the May lows were in play and they held nicely generating a slight reversal. This should be a tough nut to crack even for the central planning cabal. 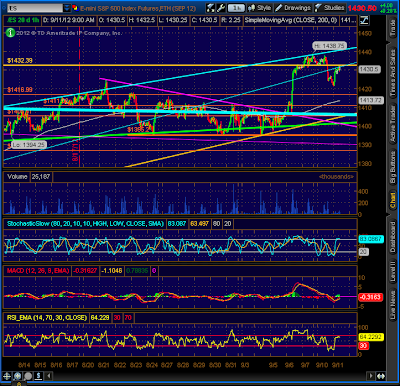 As usual, more charts and commentary below during the day. Tomorrow will be HUGE, so I suggest you have powder dry. I'm still in scalp only mode. With reality on one side trying to bring the markets down and Potter, Hilsenrath, the Treasury and the Fed on the other intervening and lifting price after every dip now is a very dangerous time to be fooling around in these markets.

If you have some time on your hands today and you have not seen this I ask that you please take the time to watch Loose Change. This is a movie that looks into the other side of the truth (not the government's side) of what really happened on 9/11.

For the skeptics out there that do not believe that 9/11 could have been an inside job I ask that you take the time to look into one thing, just one thing, Building 7 and the events that surround the last building to fall this dreadful day in 2001. What was inside Building 7? Well the SEC, IRS, Secret Service, CIA and many others had offices in this building including the NYC OEM. Oh, and the gold, lots of gold was stored there (well, was, it was removed just days before the incident.

If you find yourself intrigued and asking questions about the perfectly stable building that just decided to fall to the ground in a perfect pile of rubble (controlled demolition), then feel free to start looking deeper into what I believe is the greatest cover up of domestic terrorism ever.

Remember it was 9/11 that got the ball rolling for the ever expanding police state we live in now. The Patriot Act begot the DHS who just this year purchased 1.4 billion rounds of ammunition for DOMESTIC use. Folks, the ball is rolling downhill and coming straight at us. If we do not wake up now, I'm afraid we'll all just be killed in our sleep. They have known (if not planned) for over a decade that this financial collapse was coming and the closer it gets the tighter their grip gets on every freedom we have. You need to wake up now.