And here we sit once again waiting on Spain and the ECB to get their stuff together for the umpteenth time. So someone tell me again, will they or will they not need a bailout? When gunning for $300 billion plus in bailout funds and an economy like theirs did anyone really take that "we don't need a handout" rhetoric very seriously? My best guess is that they are employing their stalling tactics (Full flaps! Full flaps!) thus delaying any sort of news good or bad. This keeps the broad market suspended which is their best way of benefiting the whole (for the 1% at least).

I enjoyed this moment of truth from CNBS. Jim Grant: We Are Now All Labrats Of Bernanke And The Fourth Branch Of Government (do you think if I went with the Princeton Poindexter look people would take me more seriously?) It is a good listen.

This could be an eventful weekend as the global powder keg continues to erupt. One noteworthy development and disturbing trend (for those rebellious types) is the blocking of internet and phone use during times of social unrest. Pakistan blocks mobile phone signals in 15 cities is just another example of this recent disturbing trend in government control. Don't for one second think they wont do that here (and cut off your power and water supply as well).

Y'all seen any good movies lately? Dam those independent movie producers. Can you believe that this film caused such an uproar in MENA? And for the longest time I thought is was failed government foreign policies and covert CIA actions driving the unrest.

I have not read it yet, but you may want to give The Obama You Don't Know by the Washington Examiner a read. At least the chapter titles look enticing. I am still totally floored that this person is not only potus but being strongly considered for reelection. That is some f'd up stuff right there, and clearly demonstrates this country is at its lowest point in history.

Stockcharts finally let me into my first daily chart that had not been updated in a month or so. Yea! Well, not that anything needs updating really since we all know where the markets are headed under BB's mandate. I ask that you do not break out into hysterical laughter or cry when looking at charts these day. I know it is hard and all you can do is shake your head and wonder where reality has gone. Bottom line is the E touch or the completion of the wedge formation is now behind us as price overthrows the blue upper resistance diagonal. This means that we're in way overbought territory. The rest of the chart speaks for its self. 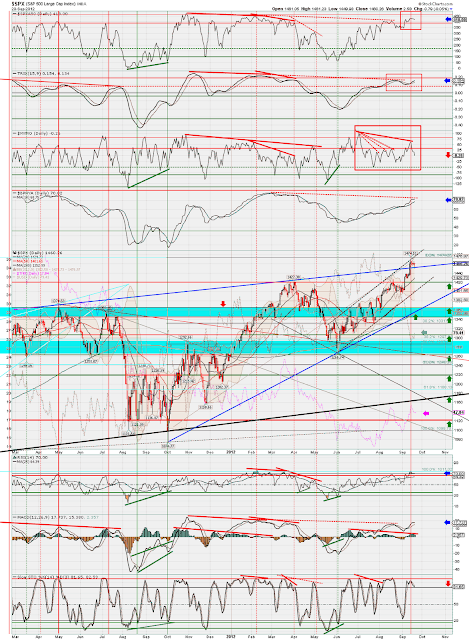 Here is another chart I showed in the commentary yesterday (you get some good nuggets down there if you take the time to look). The Trannies have a virus or something. They are obviously not participating the the QE3 induced rally. 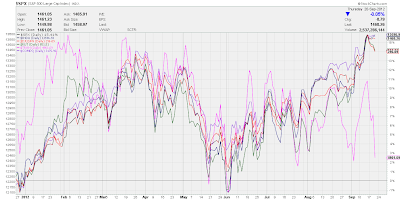