And then there was one, all that is left now is the FOMC. I'm not sure I quite get the "limitations" the German judges put on the ESM as on one hand there are limits and none on the other. Bottom line is the banksters run the show, they got to the judges and the German taxpayers got thrown under the bus. One of these days, maybe the people will get to vote on their destiny instead of a bunch of bought and paid for bureaucrats deciding what's best in their interest.

We now turn out attention to this side of the pond. With all but the most ignorant (most financial advisers nationwide) now knowing that the markets are totally rigged and QE (hidden or not) is the lifeblood of the financial markets, it is the Fed's turn on center stage.

To ease or not to ease, that is the question? We here at STB have been discussing this for months. The poll question makes it pretty obvious what the majority of the readers think. My vote was in the not ease camp. I suspect this poll's results would be dramatically reversed if I asked the same about the December FOMC meeting.

The Fed learned long ago in 2010 that the promise to ease was good enough, and thus they did not have to spend print the money to get the desired result in the markets. Note that if you think easing has anything to do with saving the economy you are dumb as a sack of rocks. All it has to do with is saving the banks, providing liquidity to the markets and transferring wealth from the poor to the rich.

So this time will be no different I suspect. Ben will promise the moon and that his tool is large enough to satisfy even the most demanding economic conditions. The Bernank does not want to "politicize' QE you see. He does not want to influence the election (LOL, Obummer will keep him and Romney will fire him, so you tell me where Ben is leaning).

Bottom line is they will have to ease before the end of the year. With congress back in session the trillion + deficit (for the third year in a row and with Obummer outpacing the spending of almost every president before him COMBINED) will be brutally brought back into the spotlight. The government will run out of money again (for the third time in as many years). The stress on the system that has very conveniently been hidden away is about to come full frontal. Things are about to get really ugly in DC.

So, a higher high was hit on the E-minis this morning on the tails of the DOW closing at multiple year highs. Why or how you must ask given current economic conditions? QE is the only answer. 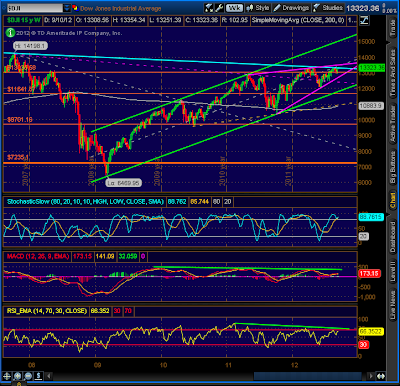 Somehow I keep dodging the top calling bullet that has caught so many other forecasters square between the eyes (if not once multiple times - Prechter). No, I did not bite back in March either, nor on the recent tops. FIVE, five times the markets should have topped on this Draghi Euro saving BS run. I gave up after the double top absolutely perfect TA set up was trashed back at 1374.

SPX Daily - They never should have saved it in June in the first place, but from the 1375 double top on this has been total BS.

I warned on August 2nd almost to the minute that we were entering a period of unprecedented intervention and that is what you are witnessing. Their backs are against the wall now and pure desperation to save their system at any cost is their only strategy. Any method at their disposal legal or not is fair game and there is No ONE that can stop the central planning cabal at this point. The banksters have complete control.

I have stated since the beginning of the blog three years ago that it will take an "event" out of the Fed's control to bring their reign to an end. Despite the dramatic debt issues, global tensions are spiking and the unfortunate events in Libya and Egypt yesterday add fuel to the already raging inferno. For about the past year and a half I have speculated that they will not be able to carry this charade past the first quarter of 2013 and I stick by that call. Something HUGE is coming and it will happen in the next several months.

So we sit and wait following the Fed's every move. I am contemplating calling a top here. I mentioned this last week. With congress back in session I believe the ugly truth is about to come front and center. After the FOMC notes are released and the Benank speaks I may call the top. If I do remember this will be a generational top. It will be many, many years before we ever see these levels again, and that is if the markets survive in their current form. 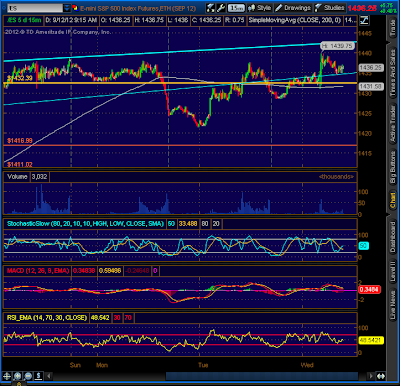