Place your bets. So, do they ease or not? All the hoopla over the past two months will climax today. Sadly I think it will be yet another uneventful day. Why should the Fed ease when a promise to ease without having to spend works just as well? I suspect today, at best we get a target date for the resumption continuation of QE.

At this time I suspect the Fed has opened the playbook from 2010 where they promised at Jackson Hole to begin easing in November of that year. In that case the markets shot up on the news and sold off on the actual event and then began a great rally thru Christmas. Long term readers here should remember that as one of my best calls ever. I suspect they target January to begin the next round of easing.

Calling this market has become increasingly difficult as the stakes have risen. Unprecedented intervention and lawlessness control all aspects of the markets. Nothing is real anymore. The early years of easing were a piece of cake to call. QE ended and the markets fell 20% then they QE'd again. You could see it a mile
away.

Now, things are different. $16 trillion in debt, multi year trillion dollar deficits, over $120 trillion in unfunded liabilities and the knowledge that their system of ruling the world and robbing its riches by printing paper (fiat, worthless pieces of paper backed by nothing more than a promise from the corrupt banking elite) is coming to an end. They can no longer simply print more to solve the economic malaise they have created.

The only way out is to go backwards. A long, long, long way backwards. You try to cut a third of your budget just to break even and then still not have enough money to service massive piles of debt. They are truly desperate folks and the big grab (or wealth transfer) is on. From real estate to stocks to future tax liabilities from you and me, they are trying to absorb as much as possible right now.

So, what does the Fed do today? Who gives a shit when you know it is all a big lie and the system is on the brink of total and epic failure? This is all a massive distraction. The Fed has turned the tables this time. Instead of generating fear that the markets are falling and must stop, they now have the markets elevated so high no one wants them to fall.

I suggest that you watch this video on the birth of the perto dollar, how the banks own and control everything and why the destabilization in MENA is happening. If we lose world reserve currency status, which is what's happening right now, it will be devastating.

The charts have been ready for weeks and the last two missing pieces to my puzzle (divergences in CPC and TNX) have come home. It is only a matter of time now. The markets are going to come down. Will this be a sell the news event or will I get my catalyst that I have been so patiently waiting on. Right now the way things are going in MENA my catalyst (and my long predicted Obummer war - no war time president has ever not been reelected - you could see this one coming a mile away) may lie in that powder keg.

As for top calling, yes, I am leaning hard on a top call here or soon. My only fear is more intervention attempting to keep prices elevated thru the election and then into the Chrstmas season. After that, I'm virtually positive that the dominoes start falling. Debt, deficits spending, taxes and a horrific set up for earnings failure all lie on the horizon.

SPX 60m - This chart is more than ready (and so are all the others). 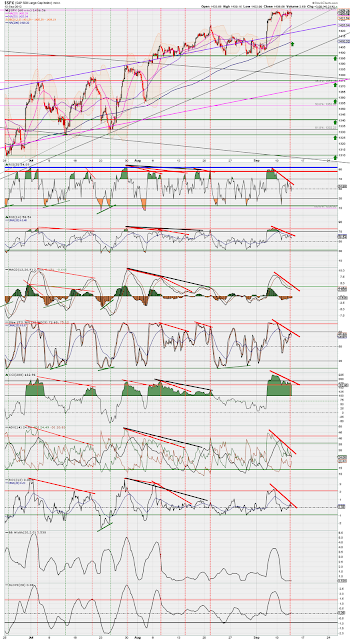 Minis 4hr - If things should falter 1400 is the first major support point. Price as noted for a week or so is battling 1432 resistance from the top on 2007 and the upper rising blue wedge resistance here. 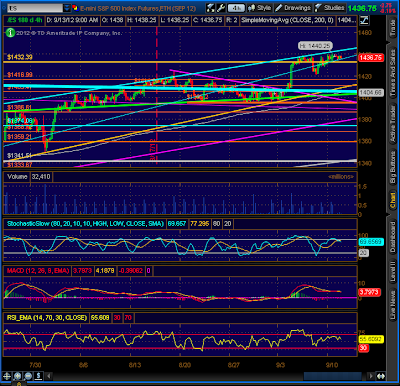 As usual, more below as the day flows.