You know the drill, share the love and the knowledge.

First some props for STB - Top 5 trading blogs of the week: 9 Feb - Welcome to YTE Blogs. This is the second time they have bestowed this honor. Thanks YTE!

A couple of charts to show you what may happen. They have done us really well since early December. Right now we sit on pins and needles as support barely hangs on. Things really don't look good. We've all been watching this top set for weeks now. Can the Fed run it another month, or has their team splintered and been given the OK to take profits here, let the markets fall and then set up the move for QE3? Greece is hopeless and everyone but the bulltards knows it.

Minis 4hr - long - More detail with the chart below, but you can see the yellow channel we've been working for months running into resistance (red). 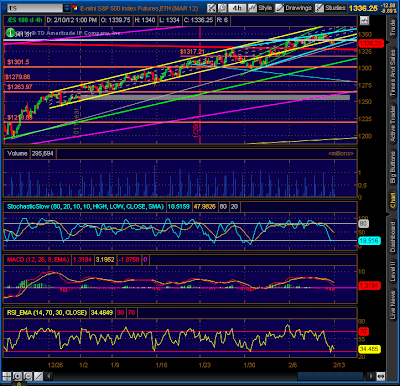 Minis 4hr - short - Possible blue rising wedge scenario. I don't like it cause this would be the third failed correction in this long run. Usually two is the max and on the third it hits the fan. You can see the green channel we followed and it busted at upper resistance. Yellow channel support fails again. Possible HnS with 1332 neckline and another with 1301 neckline. Backtest of the busted red diagonal resistance off the '07 highs needs to be busted. 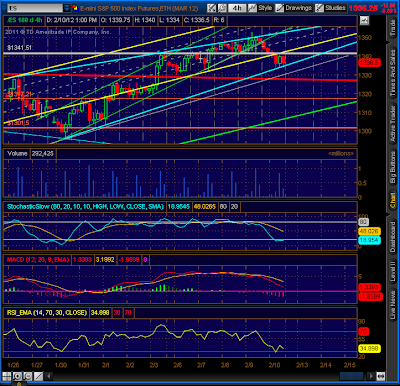 SPX 60m - There is the wedge on cash. Support barely hanging on. 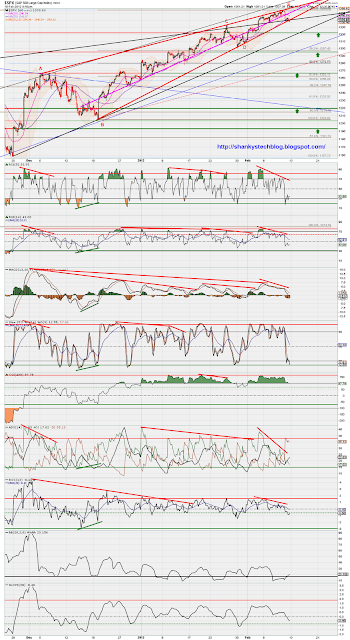 I suggest you read -

This is WAAAAY over the top. Corrupt? Arm twisting? Bailouts? this is astounding to say the least. "American Banker reports that the reason why the terms of the so-called historic (just ask the Teleprompter in Chief) foreclosure settlement deal are not public yet, is "because a fully authorized, legally binding deal has not been inked yet." Wait, so America's cohort of AGs just all, pardon the pun, robosigned a piece of paper that does not exist? What next: The Epic Farce Continues - US Attorneys General "Robosigned" A Foreclosure Settlement Which Does Not Exist | ZeroHedge

Things are not getting any better - they are getting worse. Obama Revises CBO Deficit Forecast, Predicts 110% Debt-To-GDP By End Of 2013, Worse Deficit In 2012 Than 2011 | ZeroHedge

Die or....die - Greece must back bailout or face catastrophe-Papademos | Reuters

From our very own RC - SilverSenator2012: Can't Fool Mother Nature Too Much Longer

I suggest you watch BOTH of these videos - Don't be fooled by the title, they cover a lot more than the Iran issue.