I'm already annoyed enough with all the EU bull and the hopium trade, then I see this headline this morning, Is the Facebook IPO the Start of Another Tech Bubble? - CNBC. Yes, some dork gets paid to write shit like that. I may have to totally rework the blog to a hopium induced orgy of green shoot bullshit. How's this sound for a first post - Unicorns Take It Up the Ass And Shit Gold Bricks - Is There One With Your Name On It? I bet it would get a gazillion hits. It would be picked up by the AP and poof I would be the next hottest guest host on CNBS. The whole entitlement crowd would be searching far and wide for their take of the load. It is not St. Patrick's Day, but I think the groundswell looking for the loot would look something like this.

Tech bubble my friggin ass. Seriously? Tech bubble? They actually went there? Get out your checkbooks, put a 4th mortgage on the home, take the kids college savings and stuff it all in, NOW, beat the rush, everyone is gonna get rich, rich, rich! These people piss me off to no end.

The Fed, diplomats, politicians, banksters and the crony capitalists really piss me off as well. If you can't tell I'm about overdue for an emotional release. I may have to put together a full blown old school STB rant for you folks.

Minis 60m - Yellow channel busted and is a long backtest process. There is a possible blue channel down forming. There could also be a right shoulder leading to a 1260 to 1270 range with a couple of neckline options. The heavy red resistance diagonal is drawn off the 1586 and the 1373 tops. That should (should) be the ultimate resistance. 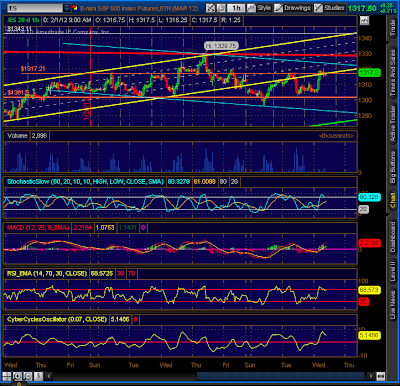 EUR/USD - Channeled down to the green support diag that originates in '02. That lower green diag is the Mendoza line. We all know what a joke the EU is and that the destruction of the failed capitalist experiment is long overdue. STB has for at least a year called for the pair to fall to 35, 25 then 16. I only have one stop left to hit the trifecta. I did miss the pop to 1.49, but when you are trying to forecast against the puppet masters things can't always go your way. 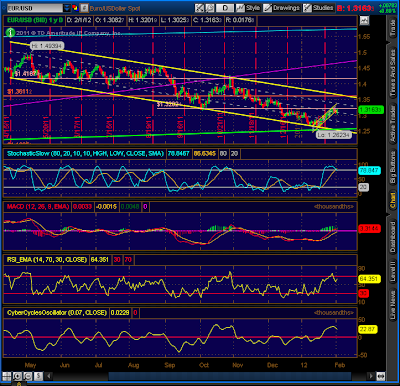 Gold (/yg) - The yellow channel dominated price since '08. I have recently added a larger white channel scenario. I thought gold may have been topping (temporarily) and be preparing for a larger pullback with the descending triangle. See Is Gold About To Collapse? Apparently cooler heads have prevailed and the buying pressure has (deservedly) returned. A few weeks ago when I did the gold post I said if it did not break down and resistance was busted that 1800 would be the next stop. That number still stands here. 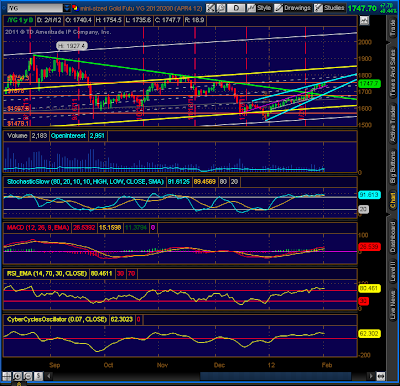 Index Comp Chart - This one does not need much commentary. 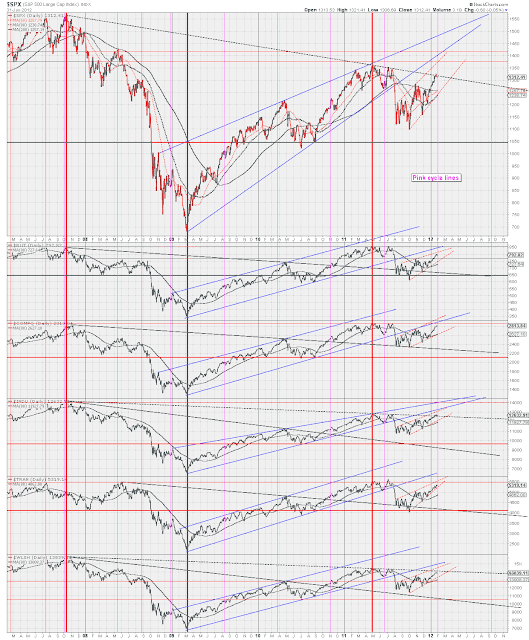