Markets prove it is all about news rumors, LTRO2 and the upcoming FOMC (not to mention several other key dates in between). Till this is all over (March 20th) things should remain dicey in the markets with both up and down scenarios (more up than down of course). Not much to comment on other than there were actually a few 5m gaps DOWN on the RUT and DOW today. This is a very rare event in these liquidity driven markets. Of course the PPT came in and scooped up the markets closing the DOW gap, but leaving one still open on the RUT near 826.

Minis 15m - The yellow channel support was resistance again and here price is yet again right back under it at the white diag we've been following as well. For a while there it looked like some form was actually occurring (and still may be) with price. STB called/Tweeted the green wedge break at the moment and then the blue wedge formed. Is that an overthrow or just another move up. With the gaps and this potential emergence of actual form, I'll say that price action at least has my undivided attention for the first time in a while. 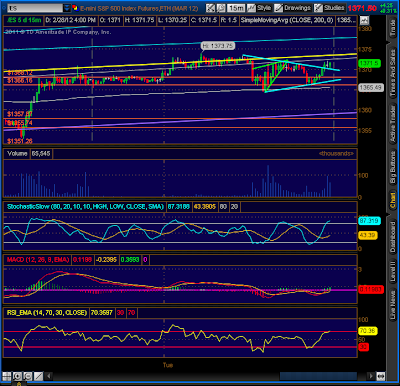 STB is still following the Fed and first and foremost. LTRO2 and the FOMC meeting with the Greek default coming (credit event or not) are all that matter now. One thing for sure, other than the election, all this crap will be over March 20th. Will all be well or will all be lost? Patience and form my friends, we're close to the answer.

For those of you that missed this last week, George Osborne: UK has run out of money - Telegraph. It is no big secret. Who is not out of money (well - the current supply - everyone can always print more)? What do you thing the LTRO2 and QE3 and Twist are all about?

The markets are broken and when I see posts like this no doubt is left that the machines are in control and the fear is real. Broken Market: Short Muni ETF Flash Smash +43% | ZeroHedge. In normal markets, stuff like this does not happen. Moves in or near the bond markets at moments like these can be huge tells (while the equity bunch is looking the other way drunk on lofty and never ending price appreciation) the bond markets are usually way ahead of the game. Now look at the chart of the MUB which is sick overbought making a nice move south (and NOT having a BTFD moment at this time).

This is real. You should be preparing as well. If all my rants about prepping have been overlooked or laughed at, then maybe a state prepping may wake you up. The one thing you need to know, if you have not seen this, is "Lawmakers in Wyoming have introduced a bill that would compel the state to prepare for a complete collapse of the federal government, laying plans for an alternate currency, a standing army raised via a military draft, and an aircraft carrier." Wyoming Introduces ‘Doomsday Bill’ To Prepare For Collapse of Federal Government Alex Jones So STB remains preaching patience for all the reasons mentioned above just as I have since the beginning of the year. I still speculate everyone will see the top at the same time. Two things that are real, 1) TA will tell the top and markets are becoming more overbought by the tick and 2) the key will be either an event or a slowing of the liquidity pump.

Hey remember the O-MFG event and how that was "definitely" a one-off event? Not so fast my friend - "AIJ Investment Advisors Co. transferred huge sums in corporate pension assets it manages to a fund in the Cayman Islands and then moved the money to the Hong Kong account of a major European bank, sources said. The Securities and Exchange Surveillance Commission has not been able to trace where the money went after reaching Hong Kong." Jesse's Café Américain: Tokyo Based Hedge Fund AIJ May Have Lost/Stolen All Customer Pension Fund Money

Big primary night. And then there were three. Romney has a lead over Santorum and Paul (very tight second place voting) on Drudge. Ganggingrich is a distant 4th.

Please read this from Ron Paul - Economy Squeezed As Debt Accelerates you will not hear this from any other candidate. It is the truth and you must know the dire situation this country faces.

I'll reserve comment on this one and let you form your own opinion - "Imagine if Ron Paul announced a national campaign called ‘Whites for Ron Paul’ – he’d be vilified as a racist. And yet Barack Obama has done the equivalent of precisely that with his launch of ‘African Americans for Obama’. Prison Planet.com » Obama Plays Race Card, Calls on Churches to Support Campaign

This is disturbing to a degree, but hey, if they want to go it on their own I say let 'em. Israel to attack Iran without US permission Alex Jones.

Transparency my ASS! What did he campaign on? Oh hope,cahange, "most transparent administration ever" yeah, another lie - read this - how his admin cracks down on the whistle blowers in the name of "national security" - this is horrendous - "Jake Tapper, the White House correspondent for ABC News, pointed out that the administration had lauded brave reporting in distant lands more than once and then asked, “How does that square with the fact that this administration has been so aggressively trying to stop aggressive journalism in the United States by using the Espionage Act to take whistle-blowers to court?”" White House Uses Espionage Act to Pursue Leak Cases - NYTimes.com

Who knows what religion this dude is? Heck, I'm not even sure he was born in America. That aside, another promise goes down (must be some sort of record for those that keep track of these things) - "But three years into his presidency, Obama’s marquee council of faith advisers has gone dark — a little-noticed postscript for a panel that he rolled out with fanfare and high expectations during his first weeks in office but ended up playing only a limited role in West Wing deliberations." Quiet fade-out for Obama’s faith council - POLITICO.com

This is a MUST READ for all. Think your conversations are private. Think you are not being monitored. Think your text that you are going to "Target" was not scooped up by the feds? Think again. Homeland Security Manual Lists Government Key Words For Monitoring Social Media, News has the list of words you should avoid if you want to stay off the FEMA camp reservation list.

This is MASSIVELY important and flies under the radar of most. Monsanto will own the food source of the world one day, and we will not be able to do anything about it. Every seed will be genetically engineered. If you are unaware or don't care about GMO food and what you put into your body you should be. This is sci-fi scary stuff what you put into your body that the government allows to get to your table.

"Monsanto has brought charges against more than 700 additional farmers who have settled out-of-court rather than face Monsanto’s belligerent litigious actions. Many of these farmers claim to not have had the intention to grow or save seeds that contain Monsanto’s patented genes. Seed drift and pollen drift from genetically engineered crops often contaminate neighboring fields. If Monsanto’s seed technology is found on a farmer’s land without contract they can be found liable for patent infringement. Judge Sides With Monsanto and Ridicules Small Farmers’ Right to Grow Alex Jones