So we have something but still nothing with Greece. It is resolved but it isn't. So, what's new? Reading that the next elections are just a few short months away and the front runner is already positioning to renegotiate said deal, poof, it all goes up in smoke again. Sadly the Greeks just don't get it. They are the first slave state on the planet wholly owned (but not controlled yet) but the central banking cabal. I believe this is the "denial" phase where they think they are still independent but in reality are powerless.

That leads to several questions, but mainly, at what point in time does someone in power just come out and tell the truth and get this over with. End game occurred years ago when Greece's government took the easy way out and allowed entitlement and tax evasion to run rampant instead of forcing fiscal responsibility on the country (sound familiar?). $320 impossible billions to be paid back later and the idiots leading the EU still want to loan them even more money (printed from thin air by other bankrupt institutions or countries). If that does mot magnify the depth of the problems for you then you need your eyes examined.

STB did well not biting on the big move Friday. We remain calm and patient. On the minis ES the green wedge support did crack and is being backtested this morning, but the blue wedge remains in play as well as the LT yellow channel support. 1352 high has held for now and appears that it will hold barring an overthrow of the blue channel.

Minin ES 60m - This is a good look at all the recent action. (same thing I have been saying for weeks and months now) Yellow channel from early December busted and gave way to the Green channel that busted and all have now formed a blue rising wedge that is struggling above red resistance off the '07 and '11 highs. 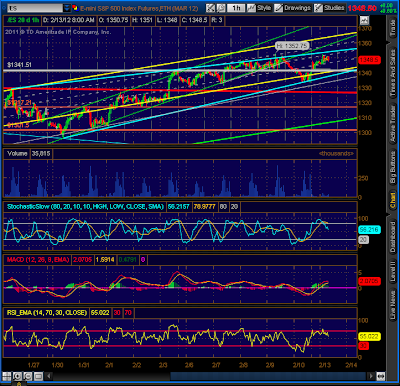 Minis ES 5m - A closer look at the action where you can see the green channel backtest and the fresh new gap formed last night (the third open gap since the November lows). Note the gap thru the 1341/1343 number and the triple support formed there with blue wedge and yellow channel support. There is also double resistance in this area with the blue wedge resistance and green channel support. That should limit the range. 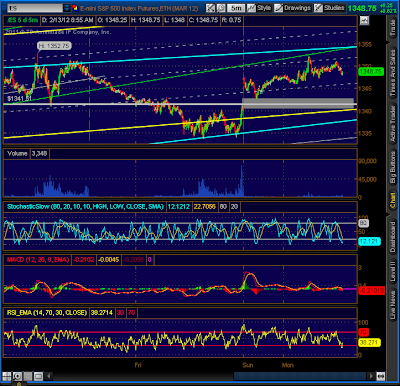 Daily SPX - The minis chart a lot better than cash at this time. Cash is a big mess, but note the overbought and weakening position as price ramps into the stratosphere for no good reason other than the Fed want's it to. 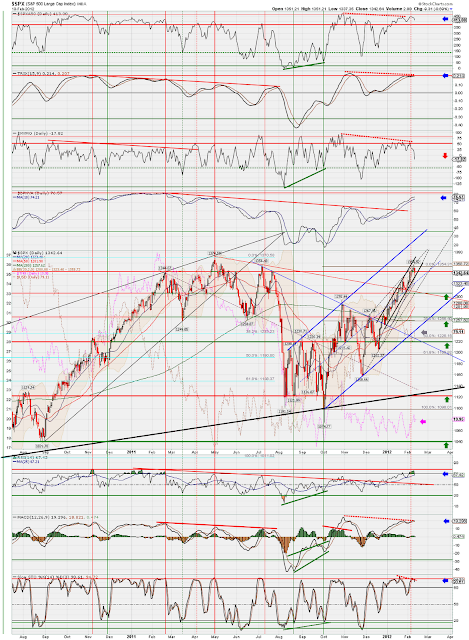 Monthly SPX - Possibly the most dire chart out there and the one that demonstrates just how weak this move is is this monthly chart. Yes, I do believe that the scenarios laid out will play out to that degree at some point, but that is not what I want you to focus on. What I want you to see is the underlying weakness in the indicators. they are lagging this move in a bad way and indicate that when this thing does finally turn (and it will) that there is no support on this chart and it screams mass exit.

Patience and form. How many times have I said it since the beginning of the year? The top will come. The problem is that the markets are not real and are under total control of the central planning elite cabal. They are setting the sheeple up for the eventual slaughter. Trust me, they don't want to just survive and have everyone come out of this alive. They want everything.

Right now they are in full protection mode and will do anything it takes to keep this illusion alive. that being the case, it appears that scalps will be in order, both long and short and maintaining any position longer is pure insanity (unless you have longs already and have trailing sell stops). I guess you could call it a nip and tuck market now (get it?).

I have long thought that the Greece solution would be a sell the news event either way. I have also warned that (I'll pull the FOMC Meeting Chart out again soon) March is full of key dates (9.13,20) that may begin to mark the end of this nightmare for the bears. Also note this is an election year and Czar Obummer will most likely get his way (unless someone wants him removed from power).

Look for a narrow day and watch that support at 1341. This market is very tired and overbought.1352 double top scenario in play on the backtest of the busted green channel support - another (like the third) really good short set up. Note all the S/R mentioned above. I'll be coming into almost every day for the next few looking for flat to weak price action.