You are tired of hearing about it and I'm tried of writing about it. The soap opera/tragicomedy that is Greece and the default drama has run is course. The plot has grown tired and viewership is waning. At least we know at this time the series ends on March 20th. Let's just hope it does not have a 4th season in production. The show's expenses are not justified.

Market participants know exactly what's going on. They are no longer fooled and understand the fuel of the markets is nothing more than exponentially expanding debt that will eventually destroy everything. The public has no clue as the "recovery" is a well disguised debt ridden repeat of 2006 illusion designed to get everyone to spend again. You have heard me refer to this probably hundreds of times now.

I suggest you read Guest Post: Illusion Of Recovery - Feelings Versus Facts | ZeroHedge. "The implications of household debt levels regressing to their long-term mean would be catastrophic to the 1%. Their kingdom of debt would come crashing down. Their power and wealth would be swept away. This is why it is so vital for them to create the illusion of recovery. Their confidence game is built upon an ever increasing flow of credit expansion. It will not work. There is no avoiding the final collapse of a boom created solely by credit expansion. Those in power will never voluntarily relinquish their grand game of pillaging the wealth of the nation, so economic collapse will be the ultimate result. They will continue to use propaganda, printing presses, and half-truths to further their agenda. But those who examine the facts will come to a logical conclusion that we are being sold a great lie."

I also refer to my exogenous (or as I called it external) "event" quite often. Back in '09 I came to the conclusion (and it is about the only call I have left from then not to come to fruition) that is would take something wildly out of the control if the Fed and the crony capitalist regime to bring the system down. We have bypassed Fukushima and many other incidents thus far. This event will have to be something that causes a total disruption in the system and mass panic in the financial markets.  It will have to be something they can not just paper over.

I found this post last week and it got me thinking. "Khamenei then claimed the current century as the century of Islam and promised that human history is on the verge of a great event and that soon the world will realize the power of Allah." This is a MUST READ POST Iran warns world of coming great event. Bottom line is this may just be extreme saber rattling, but you can not discount what these crazy, desperate, religious extremists are capable of. Sure we can destroy them on a matter of hours, but then what happens with Russia and China and the rest of the middle east?

The religious fanatics are stone cold serious they want the Jews removed from the face of the earth. "Calling Israel a danger to Islam, the conservative website Alef, with ties to Iran’s supreme leader, Ayatollah Ali Khamenei, said the opportunity must not be lost to remove “this corrupting material. It is a “‘jurisprudential justification” to kill all the Jews and annihilate Israel, and in that, the Islamic government of Iran must take the helm.”" Ayatollah: Kill all Jews, annihilate Israel

Then I saw this on Zero Hedge this morning. "The most populous Arab nation on the Earth and Israel’s closest neighbor is on the verge of something dramatic and potentially very, very dangerous. Watch carefully and constantly." New Art Cashin Reminder Of An Old Threat | ZeroHedge and that's from the grandfather of market analysis not some hack.

We all know the MENA region is extremely unsettled. Emotions are running high. Someone is gonna slip and fire a shot that they can not take back. After reading the two posts quoting the Ayatollah above my belief has been renewed that these are some really crazy fuckers hell bent on eliminating my Christian ass from the planet. It is quite obvious these radicals need to be eliminated at the first chance. I'm peaceful and passive and believe we are all one for the most part, but these crazy SOB's are out there and can not be allowed to further their war religion agenda.

You know my thoughts on the timing of the war. It probably happens in June or July. Any sooner and the war will be "dragging out" into the election. At just the right time you have a war time president, and we all know a sitting war timer has never been voted out of the office. (Note: you can also expect more unrealistic positive developments in the employment numbers the remainder of the year as the election requires some lipstick on that pig as well.)

As for the markets, we sit and wait. We may have to wait another month to early/mid March. We all know the deadline for Greece is March 20th.  I don't expect much more upside other than a possible churn. Either way it should be a sell the news event causing a minimal corrective if not a down right crash. I hate the idea of another month of the pop or drop and then churn all day, but they appear to be satisfied to drag you. me and the markets along in  this fashion until something forces the trend to change.

As I have been saying for months now the market has the potential for my "event" and a huge crash to happen at literally any moment, but they can also drag this thing out till the election. I have given the first quarter of 2013 as the max they will be able to carry this charade out. The bond market and volume (Lowest Non-Holiday Market Volume In Past Decade | ZeroHedge)are telling that most are simply waiting for the end game to come at this point.

SPX 60m - I like the red wedge for now. Any breakdown will have to be analyzed for form to see if it has merit. I still contend we'll all see clearly when this top is set. The black wedge is still in play. Looking at the charts, the markets should have turned late last week at least for a corrective. We're on overtime as far as this ramp is concerned, but the game is not over yet. Patience, as I have been saying all year. Patience and let the trade come to you. 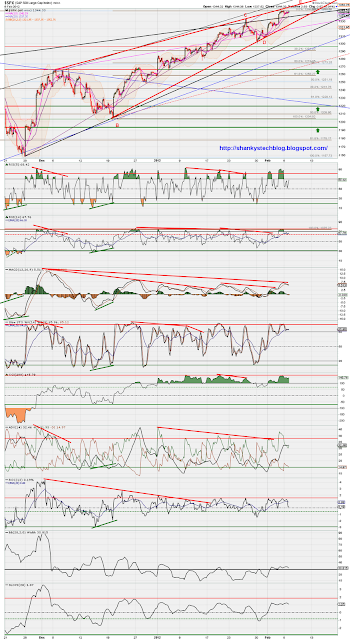