Ok, let's get this over with quickly shall we. Down and dirty. Just the facts.

We're traversing a cliff higher than those on the side of Everest. One trip, one slip and it is a long way down with little to hinder the plummet to near certain death. For this reason all the powers that be are fully coordinated or integrated (legally or not) to combat navigate the extremely difficult terrain we face the rest of the journey (no- it never gets nay easier only worse).

"central banks of the world have embarked upon what Goldman Sachs calls an 'Unprecedented Alignment of Monetary Policy Across Countries'." Unprecedented Global Monetary Policy As World Trade Volume Craters | ZeroHedge Why are they all joined at the hip if the recovery is swimming along and the EU crisis is not really a crisis? All is well, so why all of the unprecedented coordinated effort?

The stealth (unannounced cause it would freak everyone out) QE that is Operation Twist is what's keeping everything alive at this point. It is all about easing and at this point they must eternally ease or else. There are massive problems here, mainly the Fed is printing and purchasing the long end to control the yield and in the future there will be hell to pay. "What happens when Twist ends? Will the 30 Year collapse? What happens when there is no explicit back stop to the long end? Is this the reason why Bill Gross yesterday said that he fully expects much more check writing by the Fed for the next '12, 24, 36 months." And how can it not: we don't have a market of rational players any more - the entire market is merely one irrational player, whose biggest counterparty incidentally, the ECB, is beyond broke." Under Twist, The Fed Has Purchased 91% Of All Gross Issuance In Long-Dated US Treasurys | ZeroHedge

And the markets? They are dead, if not they are barely hanging on. Who's left playing is the big question? If the HFT/algo bots and the BD's were controlling 70% of the action then after seeing the chart in this post you are left wondering, who's left? "the four-week average volume on the NYSE has dropped to levels not seen since, yes you guessed it, 1999." Market Stoned Like Its 1999 | ZeroHedge I can basically guarantee you one thing, the players left are all on the same side of the trade.

Minis 4hr - Upper red resistance diagonal held last week and price is just under that resistance now. After traveling up in the yellow channel since Christmas, channel support finally busted and is in the process of what appears to be a long backtest (green channel up). Earlier this week I speculated the blue channel may form, and that appears to be working so far.

Whats so interesting is the yellow support and blue resistance are meeting just under red LT resistance (all while forming a double top near 1329). This is one of those points where turns are likely to happen (well, to clarify, in a normal market that is not hopium induced). 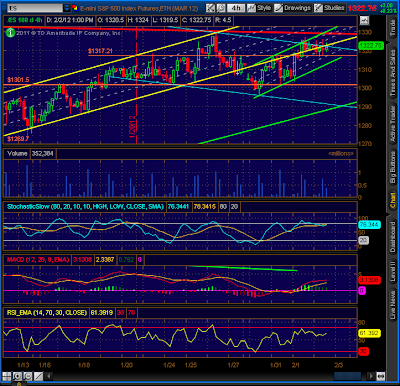 As noted all along, I never have had that "feeling" about this fall. Nothing like the ones I called in June and November well in advance of their happening. Things simply feel different this time. I know this will be "the" turn when it happens, and I believe the Fed knows as well, so full protection is in force. I have done a really good job thus far walking the markets up into the FOMC meeting. This may be the point that starts the turn. All that said, lets see what happens tonight and this weekend. If the charts hold true, it may be about to get interesting.

Minis Daily - A larger picture with key support points and the gap under 1260. Overbought is an understatement. 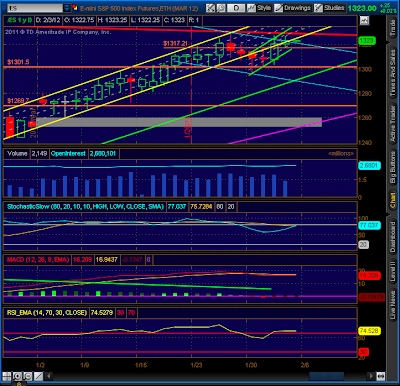 As for further upside potential, I think it will be muted if it occurs. I really don't see what they can do to move price significantly up the charts from here. In this crony centrally controlled market I would not be surprised to see the upper resistance break. It would be a technical signal (like the recent golden cross) that they would try to force simply to add to the risk on mantra. You must think risk on first and foremost. Don't get lost in the "it must turn" mentality.

Form of the fall will tell us everything. I think when this turn happens EVERYONE will see it. Big gaps and candles surrounding an "event" or news item that sends shock waves that will minimally rock the market. A Greek default would do the trick. As mentioned above, they are one trip or slip from really messing this thing up.

Playing the prognostication game is difficult. Fortunately my track record speaks for its self. Honestly, in a non manipulated atmosphere I may call a top here, but facing the Fed, I can't go there. The set up is so good with the double top in overbought conditions under LT resistance. It does not get any better. As mentioned, fighting the Fed is a fools game. At this time I'd much rather wait for confirmation cause I don't trust the bastards one bit. They are in full risk on mode. I would not be surprised to see some sort of market moving event between now and Monday.