Let's Look at the minnis across several time frames - I've been rock solid calling the minis for a long, long time. Fortunately the follow the Fed trade, preaching patience and form and some well placed trendlines have kept me and the blog on top of the action. I don't know how I stack up, cause I honestly don't look at any other chartists. I do know that it would be a stretch to find anyone that has called it as well as I have daily and intraday since the October lows. Here are the charts that have done it for me.

First - today's action Fed/rumor driven BS - Yellow channel support. There it is again. Amazing. Like I said this morning, "The purple support is now clearly in play at 1355 support level. 1368 is resistance." 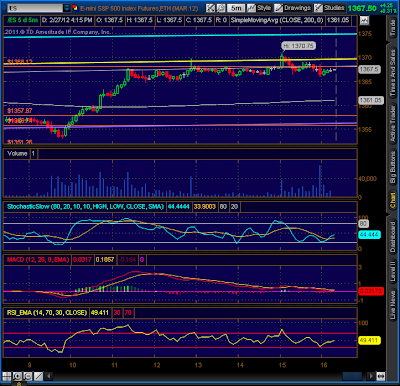 Weekly - Back it out, way out. Note first the large pink wedge. Then see the declining volume. RSI over 70, S Sto about to bear cross and the declining MACD histogram. Couple of gaps at 1250 and 1150. A month or so ago I noted the weekly charts were not ripe yet, they are close now, but nothing is diverging quite yet. Need a drop and pop for that which is a likely option, but not necessary. 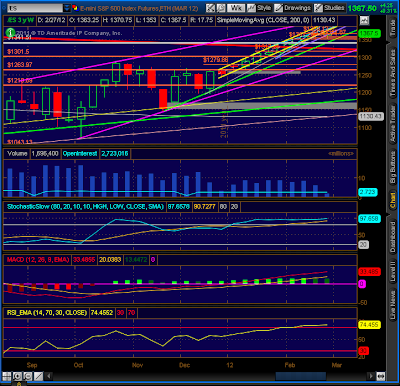 Minis Daily - Chart is hard to see but you can tell where the green support starts that I am looking at, where the yellow channel I discuss started and just how overbought the indicators are on a daily basis. Dig the disappearing MACD histogram. The lowest green and yellow diags on the bottom are support off the 665 '09 lows. 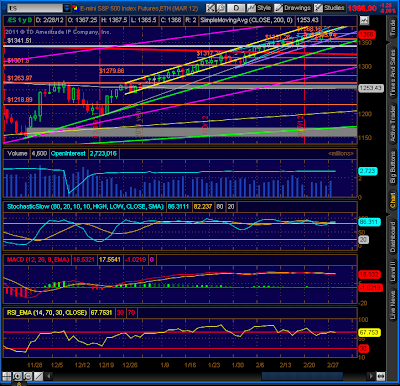 Minis 4hr - Now you can see where the purple support came from that held price up today, a screaming horrific divergence in the MACD and RSI and the now defunct blue wedge. You can also see the pink wedge from the weekly chart resistance near (cough) 1400. 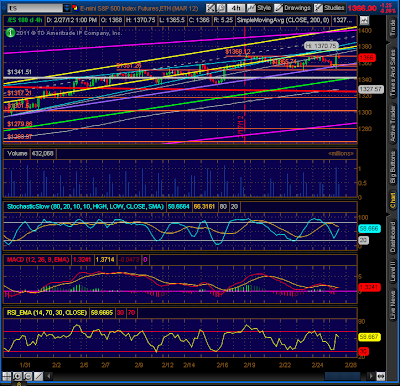 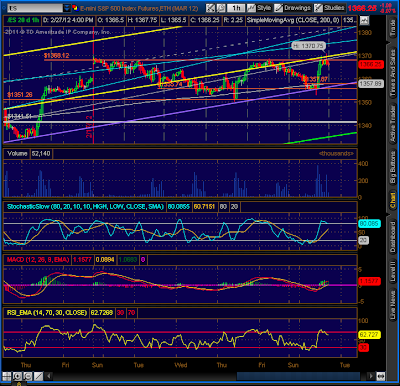 30m - 1368 resistance, interaction with yellow channel support and the white diag that comes in and out of play. Note the 30m 200ma is either declining or flat. 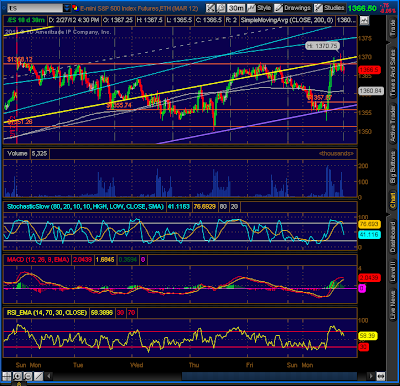 So there you have it. Now you have my minis charts in detail and know everything I know. Bottom line, Follow the Fed and pay attention the LTRO2 and the Greece default situation (which I think they will default at this time) as the PSI deal is not working. We'll know more about that in early March (along with the FOMC and EU meetings).

It is ALL about liquidity. Do they get it (a lot of it) and the markets will celebrate no matter where oil is or what wars are coming or how many are out of work or how much deeper in debt we're headed. NOTHING matters now other than does the amount of liquidity please the markets. That's it. When we get that answer then and only then will we know what's going to happen with price.

Patience and form baby. Right now March is finally setting up like last July and November where we has massive moves south. This time took a while to figure it out, but if things play out like they look the dates are becoming more clear (March 09 thru 20 if not before) for the beginning of the next leg south.

Email ThisBlogThis!Share to TwitterShare to FacebookShare to Pinterest
Labels: $ES