It was not Jim Dandy to the rescue. It was China. Then it was not China (again and again for like the 4th time - hint when things look their worst throw out a "China is coming to bail us out" rumor and that is a great temporary fix). The China soft-toss is always good for at least 10 points. Rumor Regurgitation Time: China To The Rescue... All Over Again | ZeroHedge

Of course you can also throw out a rumor that a politician has flip flopped his hard line stance as well. That will get you 10 pints and stop a slide easily. Market Spike Driven By Latest Bout Of Idiocy Out Of Greece | ZeroHedge

So here we are as usual 20 points higher than yesterday's support break and near failure on two refuted rumors but the markets remain and do not give back what they fraudulently took. Rinse/Repeat. The "rumor" train must be one of the Fed's tools that the Bernank said he had to use when needed. SEC, FINRA, regulation be damned as long as the markets go higher any method is acceptable and nothing is apparently off limits.

Is this right? Nope and you can always turn to the bond markets for the correct answer. See the chart in this post. Makes it pretty clear that this "illogical" move is nothing but. "Sentiment seems overly bullish, overly complacent, and the credit markets are sending a warning sign to stocks about irrational exuberance." Credit Vs Equity. Logical Vs Illogical? | ZeroHedge. Sadly we have to deal with it till it breaks.

I highly suggest you look at the video in this post David Stockman’s Viewpoint on the Obama Budget Disaster Alex Jones' Infowars. "What makes this new budget for 2013 any different? This time the day of reckoning hits hard the first of the next year." STB has been telling you for at least a year now the market can either collapse at any moment or they can keep it alive till the first quarter of 2013. Now listen to the video. "12 months from a thundering disaster" does not sound so good does it?

STB and the board have been discussing this since the beginning of the year. It took a bit of time to gain some traction, but it is firmly rooted in the commentary now. "They" are scared as shit of something or a market collapse and are keeping this puppy rolling to defy all odds. "Thundering disaster" or a "ton of bricks" or a raise of the debt ceiling by another 2 to 3 trillion to come passed in a lame duck session by a dictator does not work. What could that something be? You name it. there are about 50 factors of economic doom hanging out there at any given time.

Minis 60m - Are you tired of seeing this chart? Sorry but the wedge is the thang. It rules till it doesn't. The spike of the highs last night, nailed resistance like they knew where they were going of course. Pretty amazing stuff what TA can do at times. 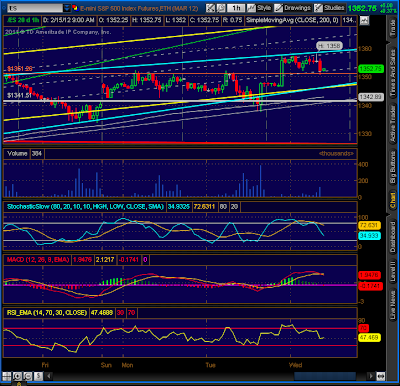 The story has not changed one bit. The same thing I have been saying for weeks, Yellow channel, Blue wedge, 1341 support. Rinse/Repeat. What is different today is the SOB's took out 1351 resistance and now we have yet another support point to deal with. Also note the 60m 200sma support on this chart now. That is a new development.

SPX 60m - Here, a new 60m chart for your tired eyes. Note the pop this morning will just make the divergences even worse. This pop will mark the SEVENTH possible turn point (It made 8 on the QE1 run). 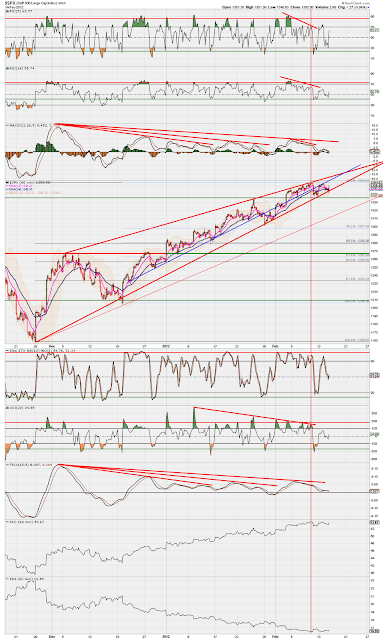 The wedge is narrowing (about 10 points wide now on the minis and a little narrower on cash). They are out of time now. Either they allow it to correct a bit and reset the lower wedge support diagonal (like they did at the end of January as called here on STB) or we should finally have at least a corrective in store.

I've been warning about dates in March for some time now (9,13,20). Can they keep it up till then? The bulls weathered another storm yesterday. They have dodged the third potential breakdown (each progressively stronger and more measurable). Will they be able to dodge a 4th?

You have to follow the Fed. You have no other choice. This is driving me nuts as a prognosticator. As I preach every day, patience and form. Let the trade come to you. Timing these tops will kill you. forget the perfect trade and maximizing profits. the important point is to get the trade right. Gangsta trading with hit and run tactics is all we have now long or short. Scalp and run. Keep those stops tight and always have an exit plan in case you are wrong. Suck up your pride and live to trade another day.

As usual you'll have to read the commentary for my more explicit calls. The 1338 call yesterday was classic STB if I may say.