It is a tough game. Emotionally it wears you out as a bear. I'm not sure how bulls feel. Do they have emotions or do they stress about tops (I doubt it with the Bernank's Put in full bloom)? The bears certainly do. The poor bears are thrown under the buss with every technical signal being crushed one after the other as the manipulated markets climb the wall of stealth QE on the backs of HFT platforms stuffing "liquidity" and "volume" as the can is kicked further down the road every day.

Fundamentals, growth, employment, housing, endless easing, corruption, all are what the bears see as reality. What the hell do the bulls see? Oh, yeah, valuations say buy, buy, buy, and of course endless QE. Oblivious and with blinders on they follow their Wall St. mantra to gore the sheeple as they lure their investments into the fraudulent markets to skim and steal from the ignorant. Heartless acts to benefit them, their beach houses, BMW's and mistresses (and a few coke habit's although that is so 90's).

The bears will be right in the end, but must suffer till their time arrives. The Fed knows they blew it with the housing bubble, so they created a debt bubble to paper over (LOL) the dark cold reality that the global Ponzi is dead. The bears all know the employment data is rigged (here, here, here), but the bulls take the government, centrally planned, crony, MSM bait and run with it. Never mind the debt bubble, it is immaterial. It has no effect on the here and now which is all that matters.

Sadly, very sadly, the bears will be right. They prepare their dens and are getting fat for the winter months. The long period of hibernation that this country is about to face, but the bulls, dude, party on Garth, schwing, schwing, schwing!! What may be vindication for the bears and a glorious moment of victory will turn very quickly into a total despair moment where everything everyone has may be lost (or stolen by the banks and government). This will not be a victory to celebrate.

I like being a bear. I like being on the side rooted in reality. It may cost me a bit now, but in the end I have a feeling this will all boil down to who has the better portfolio based in reality (primary metals - including brass and lead). Let them have their cake, they will be the ones eating it sooner than later.

Minis 60m - I'll get to the FX harts in a post this week, but for now the techincals are what need to be focused on. This is not the best looking chart. I show it for one reason, the 1343 level. It was the last stopping point (made the top of the right and left shoulder that STB called last summer when STB gave you the July/August crash on a silver platter a few months in advance. The red resistance in play off the '07 top is important at this level as well adding additional downside pressure. RSI is just about at the 70 level, S Sto has been embedding for a few months and MACD is still working its way up (but with any pop will have a massive divergence). 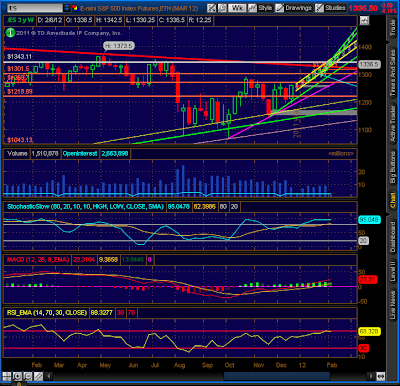 Minis 30m - Here is a closer look at the right side of the chart above. See 1343 and the red resistance in play here? See the market struggling like it did last summer at these levels? The yellow channel began in December and finally cracked late January. Price has recovered channel support as it formed the Green channel over the past two weeks. 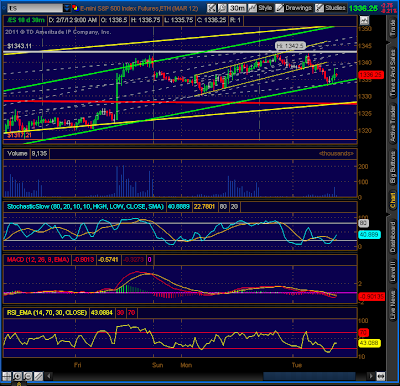 SPX 60m - The red rising wedge consolidating on top of massive long divergences pretty much says it all. 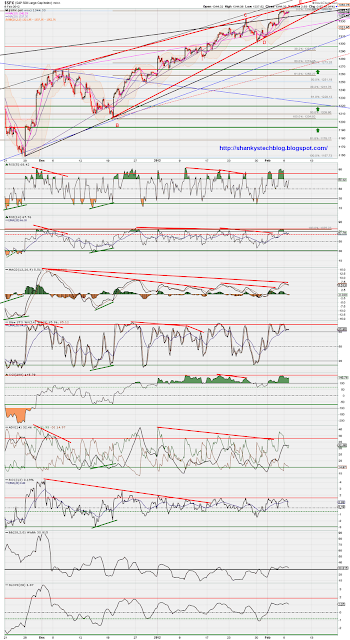 I'd like to think they can keep the markets up here till mid March and the Greek due date (March 20th), the March 09 EU summit or the FOMC meeting on the 13th. The last time we were at these levels QE was winding down, we were recovering from Fukushima and that top took almost 5 months to work its self out. Put that same time frame in place here and it would fall just short of the elections (just something to think about).

Bottom line as I have always said the market can literally collapse (as in implode) at any moment, but as long as the Fed is determined to keep the illusion alive the bears are stuck in the mud. You MUST follow the Fed right wrong, or indifferent or you WILL lose. Every day I preach patience and form. Let the trade come to you. I'd rather be late and right than miss early and often (I promise, I have been there and it sucks). We'll get the top, don't worry. Patience. The bears must maintain their emotional content. Don't think, feeeeel and never take your eyes off your opponent.