So Greece's issues got solved last night right on time. Wait, they didn't get a deal done? They got delayed again for the Nteenth time? Is that a surprise? Not really. What you have to remember is that Greece holds all the cards. Think about the idiocy of all this. Loaning billions to a country already deep in debt that relies on tourism, Ouzo and grape leaves as its primary revenue source. Then thinking that austerity measures would be enough to manufacture funds that could support that debt. So, rather than face the default you just keep refinancing and adding additional funds on top of the one's that can't be repaid in the first place. Truly amazing stuff this Keynesian system.

I'm of the opinion that a major reason for the delay is they know they are going to default and the banksters are working out the default scenario. If the March 20 repayment date arrives and no rescue funding is printed before then, look out. After the next FOMC meeting and the EU summit in early March things will get very interesting if not before then.

Why will Greece most likely get bailed out again? Simple, the puppet masters will gladly continue to throw the pocket change billions at the problem to keep the system flowing that they scalp much more in the course of normal business. The funding has just become another cost of doing business. This can't last forever. This funding crisis will yield yet another in 3 or 4 months just like last time.

Minis /es 30m - After the sensational spike Friday on the jobs (BS) report the minis gapped down last night 2 points and look to open down almost 6 points . They have recovered 3 points off the lows, but remain weak. The yellow channel that dominated trade since December has been reclaimed. Last week I began showing a green channel has developed. Price remains just above red diagonal resistance off the '07 high. This technical signal combined with the golden cross and the full blown risk on moves forced by the Fed should have the bears shaking in their shoes. I have done nothing but preach patience and form of the fall since the beginning of the year. That mode remains in tact. The gap down last week and last nigh with some of the larger recent  bearish candles say the bears are ready, they are in the house, just not in full force. Technicals matter, they will give us the top, you just have to follow the Fed till its moves run their course. 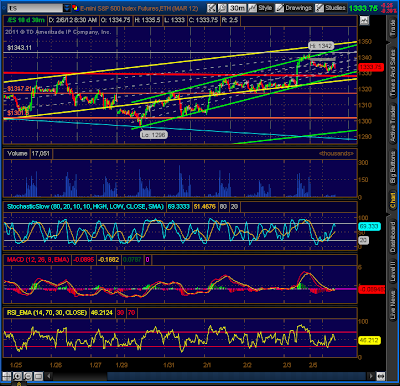 Daily SPX - All the blue arrows indicate price is ready to turn. Throw in the VIX, CPC and several other factors and you get a market with a pop off valve that is ready to blow. 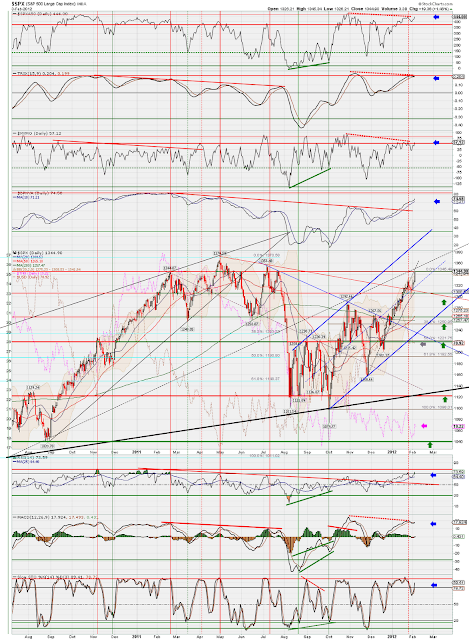 Weekly SPX - Now that price is within 30 points of the 1371 top the divergences on this weekly chart become much more relevant. As noted over the past couple of weeks, this chart was not cooked yet, but it is getting closer. RSI5 is at a point where a top is beginning to be signaled.

We are and have been at a point where a major top can occur any day, but at the same time the Fed's control and risk on strategy dominate the trade. All I can say is remain patient and let the trade come to you. I have a feeling that this top will be one that everyone will see. This most likely will be an event driven turn and that may or may not be my "exogenous event", the final single event that can not be contained, that I have been calling for years now.