It is Friday thank goodness. Pretty sure most of you are happy to see the week coming to an end. STB is not as burned out as usual. I've grown accustomed to the BTFD trade and the Fed liquidity pump and the rumor induced ramps that never fade.

We all know the bullshit that is going on. We all know the farce that is the market or should I say the farce that is everything these days (other than debt serfdom to insolvent governments). Well, I say we all know. The few in the internet crowd that actually read and have an inclination to get involved (we, the few, that are the dregs of society that are actually so informed that they want to shut us down with SOPA and other measures) know. The rest of the sheeple don't give a shit as long as the governments just do what they are supposed to do and take care of all their needs.

Zero Hedge has a great must watch must see post that explains all the LTRO to infinity EU bailout bullshit. Best part, it is a video/comic drawing that should relate easily to the 99% that the education system has destroyed. Of course, sadly, the internet crowd is the only group that will see this. You think the masses would get the concepts (too big a word) thought (ehhhh) slang (that works) of "Cash for Trash" or having someone "by the balls" or the scam of "insolvent banks lending to insolvent governments and calling it a success" (think trailer park). Please watch this (twice if necessary). Europe's Cash-For-Trash LTRO-'Scam' And The Indentured Servitude Of The Citizenry | ZeroHedge

Minis 15m - This is the only chart for now. Nothing really matters till the LTRO2 is released next thursday. Yes, another mass infusion to the banks thru the governments that no one can ever pay back that will infuse the fractal lending schemes that got us to where we are today, BRILLIANT! Call it extend and pretend round 20x.

This chart has done a great job for months now. I think we're at a resistance point, yet the possibility of a euphoric pop (if the LTRO2 is pleasing to the markets) next week is possible. If course that will be met with an immediate sell off (see QE2 announcement in November of 2010). Then you have the never ending QE3 rumors and the Fed's promise to do anything it takes with all their "tools". I'd like to tell the Fed what they can do with their "tool". 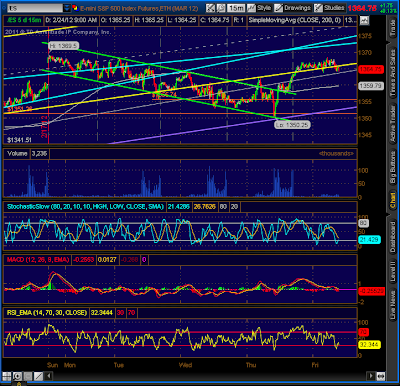 As usual, I'll call the markets moves throughout the day in the commentary section. STB has been pretty much on fire all year thanks to the minis chart above not missing many moves and following the mantra of patience and form all the while following the Fed. Did I mention that there is an FOMC meeting March 09. Pretty sure I've beaten that into your head since the last one in January.

Have a great weekend!