There really is not much to talk about unless if you want to speculate how big the haircuts from the Greece deal are going to be? How long till the Greek crisis has some sort of resolution? Can there be resolution? Who's gonna provide the funding? Will they simply default and what are the ramifications of a default? This drama has been going on for several years now. What used to be 1 year periods between funding crisis dropped to 6 months and is now almost a monthly event. At the same time the costs just keep going up with each round of funding. We here at STB knew it was a never ending spiral of debt early in the game, but they had to save Greece for some reason.

All that said, all traders can do is sit and wait. It appears the central planners have learned there are benefits to markets in perpetual limbo that are kept guessing as to whatever crisis resolution of the week is in play. I have a funny feeling thee volume less markets are focusing on the right hand of the magician while they need to see what's happening in the left.

The illusion that the recovery is in full bloom is fading as layoffs, foreclosures, earnings misses (just to mention a few issues) and debt levels continue to soar. The puppet  masters are running out of time and money. Sadly, we as citizens have no control over any of this and are being enslaved to massive amounts of debt as the banks fight for survival.

Minis 60m - Charting the minis has been key to tracking this market since December. As cash struggles to form crisp patterns, the futures have been quite accommodating. The most important item in the chart below is the red resistance diagonal at the top of the chart. That is the upper resistance off the '07 highs.

The 1329 to nailed it on the number and reversed. The yellow channel began in late December. Price appears to be struggling under red resistance as the channel support has finally given way and is in what appears to be a backtest procedure. At this time it appears 1329 top may have been it, but with team manipulation in control, there are no guarantees to upside limits. I'm watching that red diagonal closely. The potential for a blue channel to form is still in play. 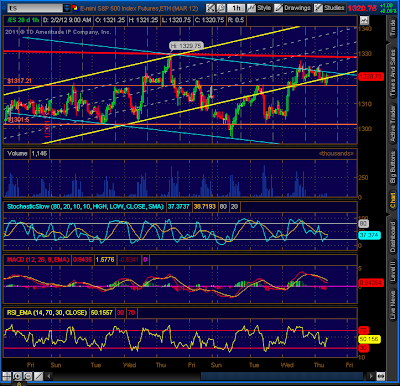 Daily SPX - The potential top is set and all we can do now is wait for confirmation. The daily chart below is ready. the question is how long can they keep it up here. 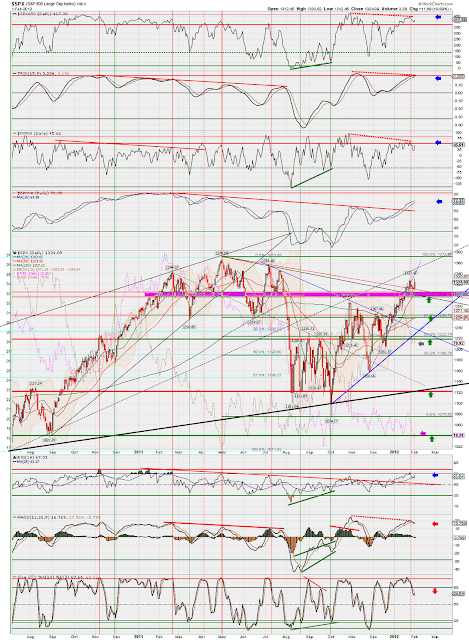 Form of the fall will be key. There have been some recent signs the bears are trying to take the ball and are beginning to assert their will. They need to be assertive in my opinion, but that is a dangerous game when the Fed just throws another trillion at the issue every time there is a hiccup. Remember this is an election year. Patience and form. The markets will let you know when they are ready. They are topping now, I believe upside hers is severely limited.