Let's start with the Chart of the Day - $ES 15m chart - covering the last two days. And to think, silly me, I was moaning this morning about possibly saying good bye to the blue wedge and yellow channel that have been magic for STB calling the shots since early January. I have rarely ever seen so many diagonals and support points in play. They are everywhere. The blue wedge is history for sure, but guess what? Another backtest of the yellow channel and could it, could it just get right back in there? Who knows, but the #Bensanity is over the top. The move today was right out of a comic book. 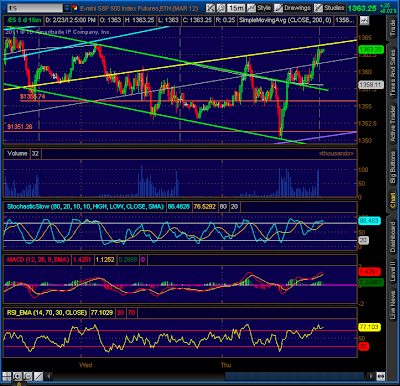 So just how bad is it? I suggest that you read 55 Interesting Facts About The U.S. Economy In 2012 where you will learn that there are "#12 There are about 88 million working age Americans that are not employed and that are not looking for employment.  That is an all-time record high." and  "#5 Sadly, 43 percent of all American families spend more than they earn each year." Now that's not a good combination is it?

This post follows the last nicely and actually reads like one of my standard AD's, "Americans participating in a recent Gallup poll showed the highest level of confidence in an economic recovery in a year.  Sounds great, but you can’t ignore the nearly 13 million unemployed, the 46 million people on food stamps and the roughly 29% of the country’s homeowners whose mortgages are under water. They would find it hard to subscribe to the poll’s sunny conclusion." Guest Post: Why The U.S. Economy Could Go Haywire | ZeroHedge

So, the wealthy are not immune now are they? The real estate crisis is over right? Did you know, "Over 36,000 homes valued at $1 million or more were foreclosed on -- or at least served with a notice of default -- in 2011, according to data compiled by RealtyTrac, which tracks foreclosures. While that's less than 2% of all foreclosures nationwide, it represents a much bigger share of foreclosure activity than in previous years." Million-dollar foreclosures rise as rich walk away. Glad we're in a full blown recovery and that the recession ended in 2009.

And how many times have I said it is all about liquidity and the excessive printing? "nothing else matters but central bank balance sheet expansion. As we discussed earlier in the week, major central banks have injected nearly $7tn into world markets since 2007 and while the obscene rise in gas prices should somewhat self-limit the print-fest, it appears not before another bubble has burst as central bankers feel safe on this path given their microscopic focus on their own inflation-measures. ..." And Nothing Else Matters | ZeroHedge

When all else fails, just buy AAPL. As for the markets, you have to ask the question is it all about AAPL? A Record 216 Hedge Funds Own Apple: The World's Biggest Hedge Fund Hotel Gets Even Bigger | ZeroHedge

OK - so is it on Iran-Israel Scenario Spiraling Down Rapidly or is it off Israel Backing Off Iran Attack?

One thing that's for sure, you don't burn Korans and not get the folks in the middle east fired up. This is horrible news - Afghan soldier kills two U.S. soldiers - but what happens when you make mistakes decisions as bad as those that were made.

Smooth move Ex-Lax - now you've gone and screwed it up for everyone. Don't just piss a few off, why not just disturb the whole hive? I am really questioning whether this was an intentional act to stir the pot and get someone over there to make a mistake (like above). Taliban to Afghans: Kill foreigners over Quran burnings

So, they won't come for the guns, they will be cutting off the ammo. BRILLIANT! New Government Initiative Would Circumvent Second Amendment By Targeting Ammunition Not Guns Alex Jones' Infowars

Of course this caught my eye, but you should be paying attention as well. They are watching you closer than you think. Top Social Media Websites Caught Censoring Controversial Content | ZeroHedge. Following up on the subject, Document Proves DHS Is Monitoring Social Media For Government Criticism Alex Jones' Infowars. So whatever you do don't have a website that has sections like police state and Obummer bashing every afternoon.