From the man who should be our next president. Listen very carefully. He's been right for decades and lays it out for you plain and simple. Heed his words. This is not fear-mongering, this is reality.

I can't add much to that. I just hope you believe his words. That you can internalize them and join the movement for real change. Change that matters. Not false political hype "hope and change" bull that has been spoken in the past. Ron Paul is the only candidate now and in the past that has spoken the truth, been totally correct on economic matters and is spot on about what's coming and how to correct it. Please support Ron and do what you can to promote his cause.

Sadly it will take a crisis as RP noted in the video to wake up the masses. Sadly then it will be to late (it is is not already). You do realize we no longer have a AAA credit rating and are the largest holders of our own national debt and that we have $16 trillion (known) in debt that is exponentially expanding that we can't pay back. You do know all that, right? Well it looks like we're headed for another downgrade thanks to the fine work of our president, congress and the Fed.

"Bloomberg reports that, "the U.S., lacking a plan to contain $1 trillion deficits, faces the prospect of another rating cut in six to 24 months depending on the outcome of November elections, according to John Chambers of Standard & Poor’s. America has had an AA+ rating with a negative outlook since Aug. 5 when the New York-based unit of McGraw-Hill Cos. stripped the nation of its AAA ranking for the first time, citing the government’s failure to agree on a path to reduce deficits. S&P Threatens US With Another Downgrade In As Little As 6 Months | ZeroHedge. Downgrades are not good and increase borrowing costs which we can't afford in the first place, so I guess in the end it does not really matter.

As for the Greek Crisis (Day 1,254 or something like that - similar to how long this country has operated without a budget) - I think politicians are learning they have royally screwed the pooch, can't put the genie back int he bottle and that square pegs don't fit in round holes. The tragicomedy continues -

This from the country that was "just short" of a 9% forecast revenue growth in January with a 7% miss??? Sheer lunacy"  Summary Of Greek Reform "Pledges" | ZeroHedge

Bill Gross puts it best "Out of one pocket, into another, and in the mean time "things get better" Bill Gross Explains The European Ponzi | ZeroHedge

Minis - ES 60m - I'm kinda stuck on 60m charts these days, but hey offer the best view of the action. Call it channel magic. From yellow at beginning of December to green here (I guess it was not going up fast enough or something). 1343 resistance is in play. Possible new orange channel. More on the markets in the morning. What is hidden in there is the rising wedge I have been showing for weeks that is compressing and about to end. The upper blue resistance diagonal is the upper wedge resistance. Green channel support makes lower wedge support. If that green line breaks it should be the beginning of at least a noticeable corrective if not worse. 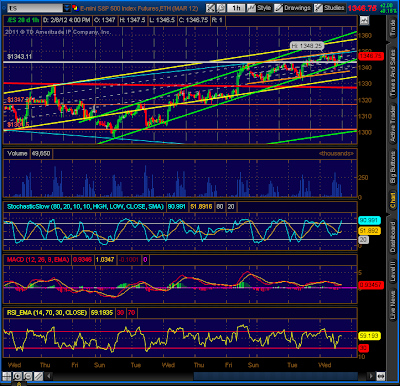 You can read this in one of two ways, foreign and US forces practice invading America or they are getting ready for a war in Iran - take your pick - they probably need to be prepping for both anyway - "About 20,000 US forces, plus hundreds of British, Dutch and French troops as well as liaison officers from Italy, Spain, New Zealand and Australia are taking part in the exercise along the Atlantic coast off Virginia and North Carolina." Marines 'assault' US beaches in amphibious drill

Our troops are ready now, first they give the green light to sex with goats and now remove God? "The action taken by the RCO suggests that all references to God, regardless of their context, must be removed from the military,” Forbes wrote. “As we are confident that your legal advisors would not suggest that censorship is required for compliance with the First Amendment, we ask that you reverse this perplexing decision.” GOP lawmakers protest removal of 'God' from Air Force unit's patch - The Hill's DEFCON Hill. HA! And some say the anti-christ is not on the planet.

Get 'em while they are hot! Sales Soar For Controversial Obama Painting After Story Goes Viral « CBS Las Vegas. STB covered this last week. Who knew so many absolutely despise our president? Shocking I tell you. Just shocking!

OK, so don't take my words and warning to heart. Not my problem if you don't. This could have come under Obummer bashing since he's the one pushing the move. Classy president we have isn't he?

"In an op-ed published this morning on National Review online, Paul decried the mandate as "something generally witnessed only in totalitarian and authoritarian regimes,” calling it a direct violation of religious liberty, for all Christians, not just Catholics." Sen. Rand Paul: HHS mandate ‘outrageous socialism’ | M.WashingtonExaminer.com