Collateral? HA! Remember a few months back when someone brought up the insanely stupid idea of using collateral to back a loan. HA! Try introducing any sort of sound principals to the global debt game at this juncture and watch it collapse. Heck, at the current rate all the Greek collateral will be in ashes at best. This system functions best on fantasy and fiat. Well, guess what Finland just threw out there to throw the proverbial wrench in the tragicomedy that is the Greek bailout crisis? Is Greek Side Deal With Finland On Bailout Collateral About To Kill Greek Rescue Again? | ZeroHedge

Let's get into the US funding (some call it a budget) and economic issues in some detail shall we - Happy days are here again!

Your president is failing you again all in the name of keeping the peace and pacifying the entitlement state in order to improve his reelection bid all at the expense of our future. I guess it is never to late to solve a problem, so kick it on down the road. "President Obama made a pledge to cut the deficit in half by the end of his first term. Instead it exceeded a trillion dollars for four straight years." Mish's Global Economic Trend Analysis: Obama Proposes Massive Tax Hikes, Still Comes Up With $1.33 Trillion Deficit; Obama's "Race to the Bottom" Education Proposal; Dysfunctional Congress

The republicons response, ""Republicans moved quickly to denounce Mr. Obama's budget plan. "This proposal isn't really a budget at all. It's a campaign document," Senate Minority Leader Mitch McConnell (R., Ky.) said... Rep. Paul Ryan (R., Wis.), the chairman of the House Budget Committee, said, "Again the president has ducked responsibility, he has punted again, he has failed to take any notable action on this crisis." "All we're getting here is more spending, more borrowing and more debt that will lead to slower economic growth,"" 4 Charts Summarizing Obama's 2013 Budget | ZeroHedge

Obummer has done his job as a democrap. The man that was supposed to unite us all and bring us together as one to solve the greatest threat of our time has polarized the nation. This is intentional to land support from the much larger entitlement class thus keeping him in office another 4 years. How good a job has he done? "Congressional polarization is at an all-time high." Peak Political Polarization As Obama's Budget Increases Rhetoric | ZeroHedge

I suggest you read Barack Obama: Let’s Steal 150 Million Dollars An Hour From Our Children, "This is insanity. Thanks to all of this debt, a national financial nightmare is an inevitability at this point.  As I have written about previously, if the U.S. government stops spending so much money we are doomed, and if the U.S. government continues spending so much money we are doomed."

Here is what you need to understand about our current financial situation, the way out is to borrow at negative interest rates and to continue to devalue the dollar. Now that is messed up, but apparently at this time it is their game plan. "The Fed’s EXPLICIT Goal Is to Devalue the Dollar by 33% … and NEGATIVE Yield Bonds Are Coming.". For those of you that have been in a cave, the Fed is about to start charging you (instead of paying you) to keep your money for you. Now that's bad.

As for the health of the economy, Natural Gas is my favorite economic indicator. Its performance has been spot on and has me looking pretty smart over the past 3 years. Why not look at another indicator like Gas consumption to see how the economy is faring? "What other plausible explanation is there for the decline from 42.4 MGD in July 2011 to 30.9 MGD in November 2011 other than a dramatic decline in discretionary driving? That 27% drop in a few months in unprecedented, except in times of war or sharp economic contraction, i.e. recession." Guest Post: Why Is Gasoline Consumption Tanking? | ZeroHedge

SPX 60m - The wedge - any questions? Not much more room there. 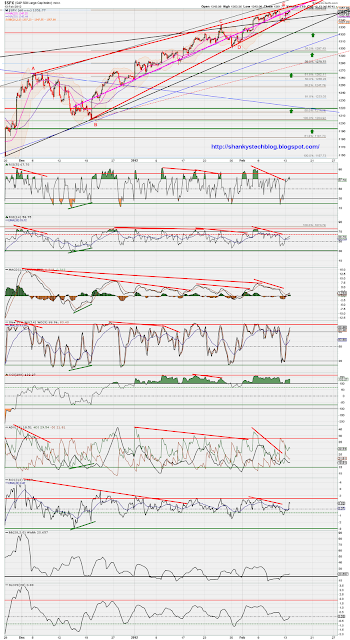 OK, is this turnabout is fair play? Is this some crazed CIA person acting to provoke both sides of the confrontation? What it is is escalation, that's for sure. "The wife of an Israeli official in New Delhi and her driver were injured in a blast from explosives slapped on their car by a passing motorcyclist, authorities said. Around the same time, a grenade-type device was found duct-taped to the bottom of a car affiliated with the embassy in Tbilisi. It was defused without anyone being injured." Netanyahu blames Iran, Hezbollah for bomb targeting Israeli officials - The Washington Post

U.S. Navy: Iran prepares suicide bomb boats in Gulf | Reuters  ""They have increased the number of submarines ... they increased the number of fast attack craft," Vice Admiral Mark Fox told reporters. "Some of the small boats have been outfitted with a large warhead that could be used as a suicide explosive device. The Iranians have a large mine inventory.""

For those of you that missed our alliance with Al Qaeda in Libya, guess who we're looking to hook up with in Syria? Why Are We Fighting On the Same Side with Al Qaeda?

for those of you that have not crossed the bridge into voter fraud is possible land, I suggest you take the leap. We've addressed this already with Iowa and I'm sure we'll address it again. "Tate explained that “in Washington County – where Ron Paul was incredibly strong – the caucus was delayed until next week just so the votes wouldn’t be reported by the national media today. Of course, their excuse for the delay was ‘snow.’ That’s right. A prediction of 3-4 inches – that turned into nothing more than a dusting – was enough for a local GOP official to postpone the caucuses just so the results wouldn’t be reported tonight.” Paul Campaign Points To Anomalies In Romney Maine “Victory” Alex Jones' Infowars

Like Charleston Heston said, "From my cold dead hands." Good luck getting over 200 million gun owners to hand over their weapons. "All that first term, lip service to gun owners is just part of a massive Obama conspiracy to deceive voters and hide his true intentions to destroy the Second Amendment during his second term," he said. NRA official: Obama wants to outlaw guns in 2nd term - Washington Times

And for those of you that think the media is biased and honest, read on, "Founded by Brock in 2004 as a liberal counterweight to “conservative misinformation” in the press, Media Matters has in less than a decade become a powerful player in Democratic politics. The group operates in regular coordination with the highest levels of the Obama White House, as well as with members of Congress and progressive groups around the country. Brock, who collected over $250,000 in salary from Media Matters in 2010, has himself become a major fundraiser on the left. According to an internal memo obtained by TheDC, Media Matters intends to spend nearly $20 million in 2012 to influence news coverage." Inside Media Matters: Sources, memos reveal erratic behavior, close coordination with White House and news organizations « » Print The Daily Caller