The Oracle has gone batty. Shall we all cry shill bullshit on this - Warren Buffett on CNBC: I'd Buy Up 'Millions' of Single-Family Homes If I Could - US Business News - CNBC.

OK, STB has been all about liquidity for quite some time now and this week we get the big liquidity answer, well at least for the failing EU (on this side of the pond we still have "tools" and QE3 to deal with). The question is not if they will kick the can, but how high will they kick it. It is either go large or go home. See this,

"In other news, tomorrow the ECB will call for bids for the second 3 Year LTRO tomorrow, with results announced on February 29. And with the ECB's deposit facility at €477 billion, it is rather clear that the banks will park the bulk of new proceeds with the ECB once again, where it will continue to be a negative carry trade, earning 0.25% at a cost of 1.00%. And somehow this is favorable for the European sovereign bond market, which continues to ignore the various layers of subordination it is now working under. We expect the market revulsion to this flaw to be violent when it comes, and will result in a rapid and sudden divergence between the various subordinated tranches of sovereign bonds." Overnight Sentiment Negative Following Failure To Boost IMF Rescue Fund | ZeroHedge

All that matters is can they infuse enough fiat into the system for a second (well, honestly, who's counting) time to pacify the markets and keep the illusion all is well.

Minis 60m - So, is the yellow channel now history? The purple support is now clearly in play at 1355 support level. 1368 is resistance. 1341 and the green diagonal in the lower right are the final support marks for this run. Of course the Fed can do anything and the Next FOMC meeting is a little more than a week away, and the Fed presidents are already making the rounds. 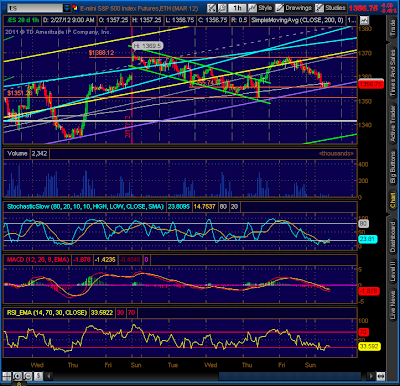 There is nothing to really address other than the LTRO2. Friday was dead and today should be as well. I'd also speculate that the EOM economic statistics this month will be over the top positive if the EU falters. We are literally on the verge of another LEH and the power to stop it is in their hands. The problem is that they know that continually throwing money at the problem and extending and pretending only makes the underlying and core problem even worse.

We're near the end. This may not be the moment, but we know it is coming. I'd expect today to be a lot like Friday with low volume and some pre LTRO positioning to happen. Tonight has the potential to be huge either way. Either they print enough and satisfy the markets or they don't. Remember this market can literally crash at any moment, but it won't till they slip and fall.

Patience and form, we're almost there.

UPDATE:  Minis 30m - check out the spike and hold at purple support. Damn fine job by Benny and the Ink Jets holding that point (so far). 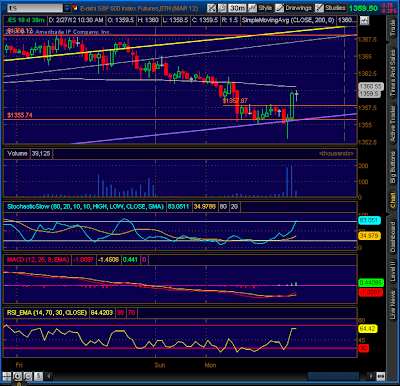