All is well. Forced risk on is doing its job along with the BLS BS. Hopium induced trade inducing euphoria to make you ignore the underlying rot that plagues the structure. Remember this is an election year and the Fed has their back against the wall.

Santelli notes ZH and their fine work telling the real story behind the jobs numbers. It is simple to manipulate the data when none of it is real in the first place and is all "model" based. When 1.2 million of your participants that negatively effect your data fall off the backside it makes the end result look much more positive than it really is.

Want reality? Read this, "A month ago, we joked when we said that for Obama to get the unemployment rate to negative by election time, all he has to do is to crush the labor force participation rate to about 55%. Looks like the good folks at the BLS heard us: it appears that the people not in the labor force exploded by an unprecedented record 1.2 million. No, that's not a typo: 1.2 million people dropped out of the labor force in one month! So as the labor force increased from 153.9 million to 154.4 million, the non institutional population increased by 242.3 million meaning, those not in the labor force surged from 86.7 million to 87.9 million. Which means that the civilian labor force tumbled to a fresh 30 year low of 63.7% as the BLS is seriously planning on eliminating nearly half of the available labor pool from the unemployment calculation. As for the quality of jobs, as withholding taxes roll over Year over year, it can only mean that the US is replacing high paying FIRE jobs with low paying construction and manufacturing. So much for the improvement." Record 1.2 Million People Fall Out Of Labor Force In One Month, Labor Force Participation Rate Tumbles To Fresh 30 Year Low | ZeroHedge

Remember they are about to start selling negative rate FRN's, the Fed is buying 91% of the 20+ paper, we'll have ZIRP for a few more years minimally and GDP is barely positive if that. This is surely sustainable (/sarc). The BDI does not lie. Greece is about to deliver 70% haircuts to bondholders and the rest of the EU is a total mess. Remember there will be a great price to pay for all of this stimulus.

Breakout or bust? Is this the head I was speculating about on the minis earlier this week (neckline 1317)? Is this a move to the next FOMC meeting and the early March EU summit near 1340? So much for that set up I was looking at last night. Nothing like a double top under major resistance with embedded daily indicators suffering a breakout move in an environment that virtually guarantees a decade of economic hardship.

I have preached patience and will continue to do so. Following the Fed is the only rule and as warned risk on means risk on (especially in an election year - I suspect the employment surprises to come the rest of the year (real or not) will be mind boggling). They appear to have the minuscule volume markets well under control (and having the data manipulators in you back pocket does not hurt).

Is it time to pull out the FOMC chart again? Why not. 1340 and the first or second week of March appear to be the next likely levels if this insanity is to continue.

Weekly SPX - I have noted that these indicators were not ready and may need some more time to mature. Some are at levels where a turn is possible. RSI 14 and MACD are the only two not ready. I'm not gonna put the cart ahead of the horse till the Greek issue is put to bed (for this month at least). I really like the markets topping near here and that RS scenario playing out, but it might be time to start considering that upper pink diagonal (yes, the 1370 highs could go down). Is the big grab on? Is this the beginning of the big blow off top, suck 'em all in move to mark the final top? I'm not all that sure about that, but you can't rule it out.

Daily SPX - This chart is so ready to puke up a lung. 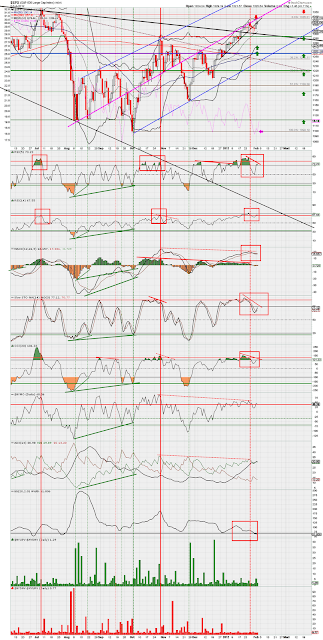 I still preach patience. I'm glad I did not bite on the set up yesterday, and that I have succumbed to the follow the Fed mantra. The are shoving this move down the bear's throats and will not stop till something stops them (my "event"). The dislocation from TNX can not be ignored. Form of the fall - how many times have I said it.

Bottom line is it is their world and we should be happy to live in it. It is an election year. I'm still watching the EU very closely as they are deep in the woods and can not find their way out. I don't need to go into the plethora of geopolitical issues that exist. Patience Padewan. I remain in a bearish topping mindset. It is possible a move like this is just the thing that they want before a negative event (Greece) they know is coming - we've seen it before.

Have a great Super Bowl weekend.