Something like $18 billion? That's it? Chump change. The Fed can print that in a day or two (they can manufacture it electronically in nano seconds). That is what stands between Greece being saved or the potential EU collapse or the possibility of the CDS being triggered on a default. That tiny amount can lite a fuse that sets off a multiple trillion time bomb. Why can't they just give them the next big fat bailout and lets things just keep on rollin? Well, when the broke have been lending to the broke and everyone is printing funny money to make the world go round, something at sometime in the cycle has to break. Welcome to that point.

SPX 60m - I've been showing this wedge for a while now and preaching patience. Last night in the AD I showed this with the VIX's divergence to price. I think it will be safe to finally say the wedge has busted after the open. Key support points and fibs are on the chart. This wedge busted once before with that dip at the end of January. I would not be surprised to see the Fed and the bulls fight back. This is the most solid negative action we've had in sometime which is a huge plus for the bears. It has been building. 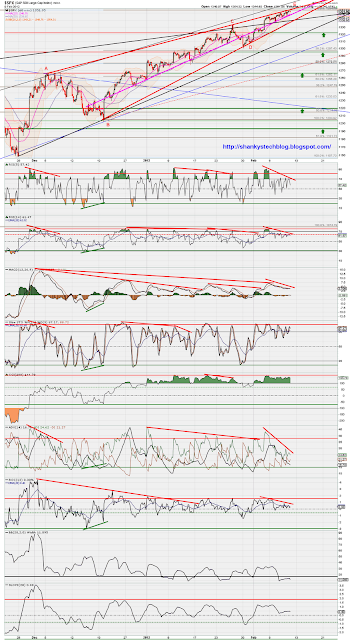 Minis 60m - This is the chart to watch. Yesterday STB noted the green channel had been cracking and finally busted with meaning. Then we were to watch key support at 1343 which failed last night (These things only happen in the dark remember?). Now price has moved to yellow channel support. Next stop, the backtest of the red S/R diagonal off the '07 top (which will be redrawn soon to mark this top and the new resistance diagonal). 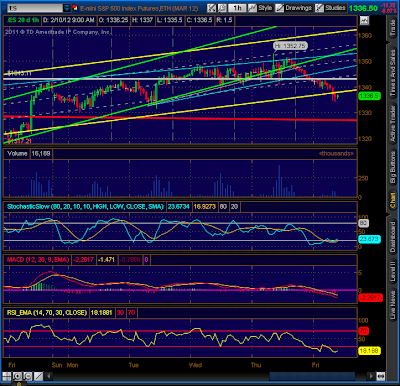 Patience. Patience. Patience. Form. Form. Form. This is a great start. We've had technical signals galore saying at least a corrective would be in the works. Remember they have till March 20th to get this deal worked out, so they can carry the bailout/rumor/ramp train a bit longer if they like. Do not forget this is the Fed's market. The moves indicating a turn was coming have been growing and becoming larger with each attempt. All have failed thus far. This is the best move yet and is worth getting excited about.

I'll be watching that yellow channel support. If that goes then price will at least retrace to the red diagonal in the 1327 neighborhood. If that goes (which will have to happen in a gap or in a large quick move IMO), then we'll start talking more than likely sub 1300, but let's not put the cart ahead of the horse. One should expect a backtest of 1343 should happen before any significant move south.

I'll be calling all the action in the comments section so check there for updated charts and target talk.