Nice to wake up to a crashing dollar the day before Thanksgiving. My 74.50 target has now been achieved. The usual corresponding move in the minis is there but it is very muted compared to a normal swing like this which is somewhat puzzling. Is this a hint at some dislocation? 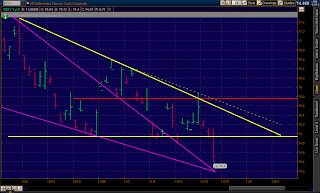 DXY daily -  Remember the triangle from yesterday? Bingo breakdown and it just so happens at the apex point of the larger falling wedge (pink). That is over a $1 fall this week. Normally that would have produces massive moves in the minis, but it did not. 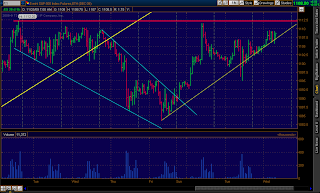 /ES 60m - Just an absolute mess the past couple of weeks as the minis struggle to go anywhere. The normal reaction to a fall in the dollar (super spike to new stratospheric highs) is very muted this morning which has me very curious as tot his topping action. Is tha some sort of really ugly H&S pattern or will equities catch up to the falling dollar? 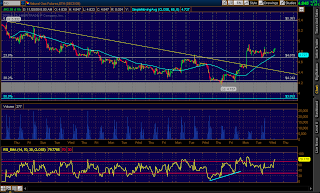 /NG 60m - Is the spike from yesterday fading? As long as that 65m RSI holds she's got the possibility of running. I would not rule out a backtest of that yellow trendline. If the dollar is falling then the markets should be running, so NG may follow, but there are no guarantees to that. Keep your stops tight. 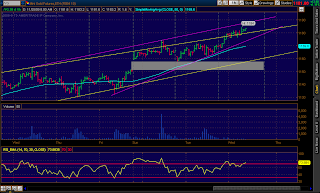 /YG 60m - The recent haywire run up in gold is something. Can you say FEAR? Pay no attention to the gap as there are bigger gaps below and a lot of them. It is cracking the upper resistance line (pink wedge) which is usually a blow off move. Might need a breather soon (but may not). Technical support at 1,000 is very firm.

The pretty dramatic drop in the dollar last night and the lacking corresponding move in the minis is something to note. Usually the inverse reaction would have been significant, but this one is somewhat muted. The super choppy market action the last couple of weeks have been a battle between the bulls and bears as the dollar was bottoming (or at least some thought it was). So the dollar breaks to new lows, but the minis don't follow the day before the Thanksgiving holiday. I just think that is interesting.

GL out there. Happy Thanksgiving.