Weekly jobless claims up. Cash for clunkers pulls forward demand that will leave a bruise (along with the possible death of Saturn) that will be nice and purply green in a few months. CNBS gleans it over as no big deal. If the numbers had been better than expected I would think Liesman and Double D (she is hot, you gotta admit it) would have broken out the party hats.

I spoke with someone that wanted me to dumb down a morning post where a former lobbyist can understand it. What I would like for that person (or anyone that needs remedial charting/EWT 101) to do is to READ THIS POST and then come and ask me further question. It is a post that I did on September 18th for another significant local that wanted something they could understand. Not much has happened since then other than the wedges that were shown are playing out. Any of you that have questions can email me.

Ok, on to the charts.

As the wedge turns and churns. Bears are chewing holes in their seats as they try to discern if the top is in or not. This has been a brutal run for the permabears. They should have no fear as this rally will fail and a significant drop will occur. I will do a simple post/rant (way overdue for a purging) to convince you of this soon. If you don't want to wait for proof please visit Zero Hedge or The Market Ticker now for your fix. There is a reason that Konichiwa has been added to my vocabulary, and it is not because it is some trite, cute, formerly trendy, nerdy uncool, dorky thing to say. It is because I believe we are the new Japan and will endure years of pain. This will be great for traders (not those that are getting screwed but their BD's for disallowing sales of short ETF's - uh, like, MOVE YOUR ACCOUNT).

SPX daily chart - Tried to take out the lower trendline but could not close below it. Indicators are still confused which adds to the difficulty of trying to predict direction. S Sto held its bull cross, but RSI and ADX are swinging south and MACD hist reversed course and began to fall again. Really playing in a mind field here. The key fibs for this fall are 50% at 1036 and 61.8 at 1025. The next big number would be the 38% fib for the whole climb off of 667 which is 999 (inverse number of the bottom, hmmmm...). Do not be surprised if it gets there and has a good bounce. (The regular readers know that I have been begging for this for a month or so now).

/ES 60m - I am following (as noted previously) the big green triangle. This market the whole bull run has formed triangles like this and then made nice measured moves on big breakouts app the way up from the bottom. The yellow channel is what I am calling the wave 4 correction of this last run up. You can see that a period of consolidation is occurring. While I am sticking with the call for a 5th wave up to end the rally, my alternate count is that the top was made and it will break down and thus we'd be in the dreaded fall of P3. 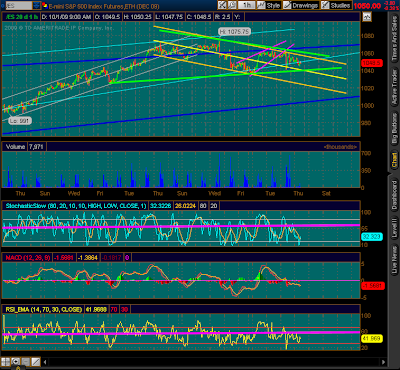 GL trading
Posted by Shanky at 8:32 AM