Bloomberg has Roubini Sees Stock Declines as Soros Warns on Economy. "U.S. consumers are “overdebted” and the country’s banking system has been “basically bankrupt,” Soros said in Istanbul today. “The United States has a long way to go.”" Yet, this same Bloomberg article brings you "Stocks will continue to advance, according to Byron Wien, vice chairman of Blackstone Group LP. The S&P 500 is poised for its biggest fourth-quarter rally in a decade as the economy recovers and earnings exceed analysts’ forecasts, Wien said in an interview on Sept. 28." Interesting, I guess one of these guys is gonna be right. Will Wein be the wiener or the winner?

I came into this article throwing caution to the wind going to the hoop with conviction that XLF is toast. Then I read the Wein remarks and the manipulator alarms all start going off in my head at the same time. Then I also remembered this wedge I have on my chart and the lack of a completed retracement. Then I find Wells Fargo Follow-On Offering In 3...2...1.... on Zero Hedge covering Government Sachs recent upgrades of select financials. Sorry, I'm feeling a little queezy after these findings and you may be as well after reading this.

So I dug some more - From the Yahoo Finance TechTicker I bring you The "Real" Economy Is Dying: Q4 "Going to Be a Bloodbath," Whalen Says. "The shrinkage will continue into 2010, Whalen predicts, suggesting the banking sector hasn't yet seen the peak in loan losses. Institutional Risk Analytics forecasts the FDIC will ultimately need $300 billion to $400 billion to recoup losses to its bank insurance fund. (In other words, the $45 billion the FDIC sought to raise last week by asking banks to prepay fees is just a drop in the bucket.)"

But lets take that puny ass little blurb that Yahoo got from Whalen and put it on steroids at Zero Hedge why don't we - Guest Post: Bank of America - How Much Should Bond Holders Be Haircut To Restore Solvency? "Securitization was once a hidden cash cow for the sponsors, but now that the situation is reversed. Collateral values have fallen dramatically and will fall further in the next 12-18 months, thus banks such as BAC, WFC and C must take that hidden windfall profit out of their pockets and essentially reverse the original transaction - and then some. Otherwise they get sued. This is why the dealers are desperately trying to buy-off prospective plaintiffs with under-the-table payoffs to prevent this ugly reality from being exposed through litigation. This is yet another reason why we laugh uncontrollably when the economists suggest that Lehman should or could have been bailed out."

And then I found 500 To 600 More Bank Failures Coming In Next 12 Months As FDIC "Hit List" Plays Out: 2011 A "Good Year" For "True" Merger Activity According To Raymond James Bank Analyst. Raymond James (at one time the worlds largest investment bank not to long ago) I guess is entitled to an opinion. The title is all the fluff as this is an excerpt from a subscription only article that I would love to get my hands on.

The Big Picture has Bank Failures Reported by FDIC. A nice simple chart.

There, I feel better now, but this is not helping us at all with the conundrum we investors are facing with XLF and those wedges right now. We get the fact that the banks are insolvent and have trillions of worthless paper in the closets all marked to market. Let's just get to the charts shall we.

XLF Daily Chart (Better viewed HERE) - The divergences in the indicators to price are tremendous on this chart and too big to be ignored. Combine that with the fact that this is a daily chart, the blue trendline breakdown and price consolidating in the black rising wedge very close to a bear market top tendline. It may be pinned under the 25ma after the gap up this morning. Volume is dead. 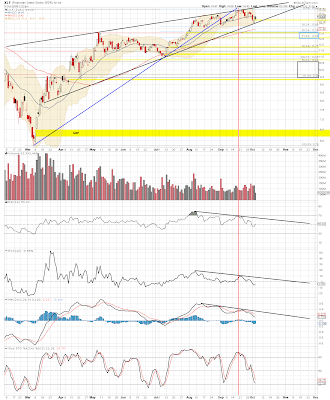 XLF Weekly Chart (Better viewed HERE) - This is the meat of the technical argument for more downside. In this chart you can see the bear market top trendline (that was abused by most other indexes). You can see my original rising wedge (black dashed) that Mr. Weil might be fixated on. Then you can see the blue wedge nicely ending at the top trendline following a breakdown below the red bull market trendline. Volume is dead.

RSI is of some concern to the bears as the hook up is not desired. I have been begging for divergences to form and it is possible with a pop here RSI will deliver. MACD histogram has a horrible divergence. S Sto has bear crossed and broken the trendline. TRIX resembles Mt. Everest and is peaking. CCI, CMF and MFI might be falling apart. 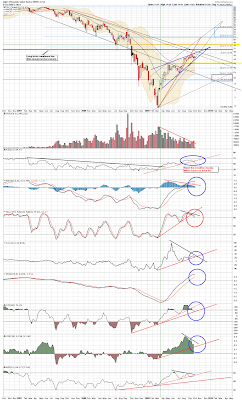 At this point I have to respect the master manipulators and the possibility that P2 is still alive. Could the shorts get squeezed one last time? The banks have horribly lagged the other indexes (well, except for "certain" banks) deservedly so, yet they may lead the troops down. The mere mention of a second stimulus has me thinking Dow 15,000 without it breaking a sweat. The dollar manipulation is not over. It may have finished a 4 corrective and have a 5 down left (although if it is I think it will truncate).

Point of all of that is that jumping the gun and going balls deep short at this point may not be the smartest thing to do. Sure it looks great. Sure the indicators look like a better shorting opportunity than any other time in this run up. But remember, they have looked good for a serious top about 6 times thus far as well. You are playing against a rigged deck. Bottom line is that it will all come crumbling down to earth sooner than later. If you are short, have a plan and stops set and be prepared to leave a loser. If I am wrong and the upside is in, at least I encouraged you to wear your protection and you slept better because of it.