I threw together a new long term Dollar:SPX comparison chart. Two possible scenarios. 1) A possible H&S with a target of $40 or 2) A possible falling wedge with a target near a double top at $120. Yeah, that is a huge disparity, but that is what the chart says. I prefer the dollar going back to $120, but can you really leave the possibility of the dollar falling to $40 out of the question?

Fo those of you laughing about the possible H&S formation and the $40 price tag, please visit Einhorn bets on major currency 'death spiral'. "Greenlight Capital is betting on the possibility of a major currency collapse and a surge in interest rates, the hedge-fund firm's manager David Einhorn said Monday, citing ballooning government deficits in some of the world's most developed countries."

And Rumors Of The Dollar's Demise Have Not Been Greatly Exaggerated. "Nothing can stop the systemic annihilation of the dollar at this point absent a major exogenous event, or constipated European bureaucrats saying enough before one Euro can buy a few hundred million portraits of George Washington." and I believe this wholeheartedly. Now, who has been calling for a major "external" event since April? Shuh, that'd be me. This will not end without a war or something major out of "their" control occurring.

Look for RSI to bottom the way it has in the past with a slight divergence before any pop. Looks like sometime near the end of the year this pop might happen. If we get a big oversold condition like between '02 and '05, America will not be the same ever again.

IT SHOULD BE AS SIMPLE AS LOOKING FOR THE DIVERGENCE IN RSI TO BE SET, and none is in sight right now nor is RSI near where it likes to bottom historically. Thus, the dollar is not there NO MATTER WHAT COUNTS YOU MIGHT SEE (IMHO of course). I have a $USD chart that has the dollar in my wave 5 target area, but I am not biting long here. I was right on 8/31 when I posted there would be more downside, and I may be right looking for further downside here. At $74.50 I'll be getting interested.

Chart may be viewed here better. 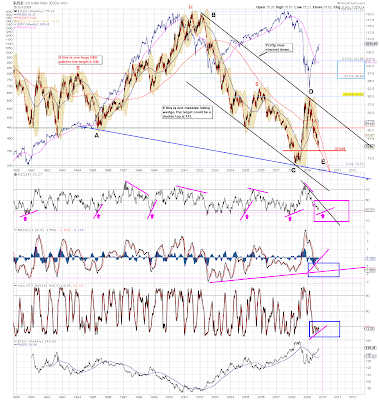