Ya think for the past year there has been a strong correlation between time and price movement?

SPX Daily - Blue and green horizontal boxes measure bottom to bottom. Yellow is low to high. Notice any similarities? Each colored box is the same length. So, I'd say for the past year we've had a very measured and uncanny market based on historical perspective. Almost like .....it was being manipulated. Of course at this time they are about to overshoot time and have blown out the average height measurement (noting the overthrow I've been telling you about for the past 6 weeks). On one daily chart I have counted this as the 13th negative divergence without a major correction. 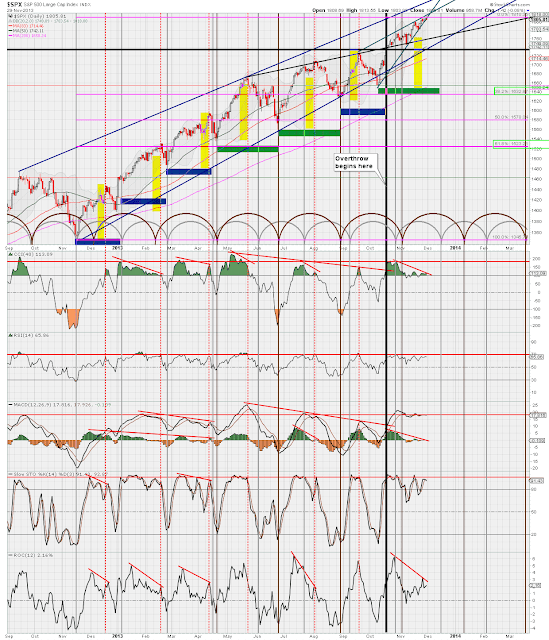 SPX Weekly - I do not know how high they will take it, but it appears the market will top by September of next year. Preliminary TA target is for a bottom of 630 SPX in April of 2016. I do believe this is a VERY conservative target in price and time. As for price, I think a 3 handle or the complete obliteration of the markets as we know it is what I believe is coming. As for time, you know I believe we have still not seen true capitulation. When it goes, it is going to simply go. Everyone will want out at the same time, everyone. It is more realistic to think the market will bottom in 2015 if not 2014. The yellow boxes are all the room that's left.

I hate to start the Xmas season with this, but you should hear it. Whether you like the Pope or not, whether this is the last pope or not, whether you think the pope is pure evil or not, his words over the weekend need to be heard and may just be a dire warning of what's coming sooner than later. From End times will bring greater persecution to Christians, Pope says

"Reflecting on the day's reading taken from the Gospel of Luke, in which Jesus speaks of the trials and tribulations that will precede the end times, the pontiff explained that when the Lord refers to this in another passage, “he tells us that it will be a desecration of the temple.”

It will be “a profanation of the faith, of the people,” he continued, and “it will be an abomination, it will be desolation and abomination.”

“What does this mean?” the Pope asked the Mass attendees, responding, “It will be like the triumph of the prince of this world: the defeat of God.”

“It seems at that final moment of calamity, it seems like he will take over this world, he will master of the world,” the pontiff observed, adding that in that time we will become aware this apparent victory over God would be more devastating than a great natural disaster."

So, maybe it is more important than ever, this season, to remember the real reason for the season.

Have a good holiday season.