Since it is all about the Fed, I suggest you read The Ultimate Guide To December’s FOMC Meeting: Breaking Down The Participants.  You need to remain cognizant of the endless chatter of Fedspeak and try to see thru the lies all the while knowing that the last time they seriously considered tapering you know how the market reacted.

The market's reaction is everything, cause technically there is very little room before critical support is met. Because of their feverish ramps they have left massive supportless holes below price all the while creating sensationally overbought conditions that are technically screaming for a major correction.

Thrown into the mix is an administration that is way out of control and desperate to destroy the constitution and nation. This administration fully supports and condones the out of control deficit spending knowing it will bring the country to its demise. The latest and greatest is Obummer's hiring of John Podesta. To make it simple, this man believes in the power of the president and his use of the Executive Order to enforce his will over constitutional process. This should gove clear indication of where we're headed politically with out lame duck president. That my friends is horrifying.

Minis Daily - Yellow wedge overthrown by red wedge which briefly turned into the pink channel which all is being overthrown by the green wedge which has driven thru the upper blue long term market resistance diagonal. It's just nuts. 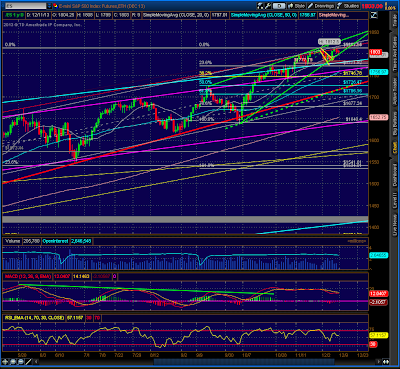 Minis Daily - Same chart drilled down to just the green wedge.
So major support goes green with 20dma (1798) then blue (1778) then pink with the 50dma (1757) and finally the red diagonal of death near 1725 (which coincides with a green channel breakdown target line (green dashed). 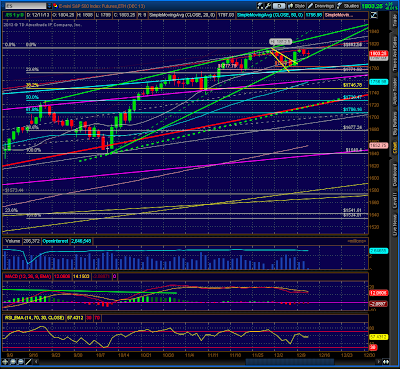 Minis 30m - A closer look at the upper end of the green rising wedge. Red resistance at 1812 and green support at 1797. the round level will act as support as well. 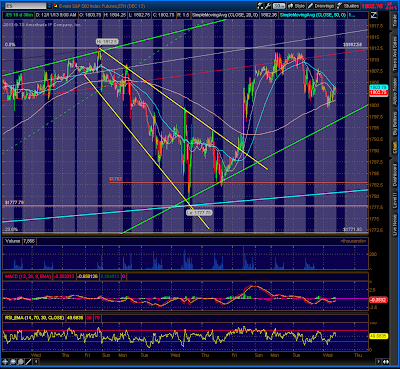 I still think she's primed for some sort of tumble. May be we get a brief foreshadowing scare soon and rally till the fat man comes. I'll reiterate my fear of January and February.