Natural gas surges after EIA inventories data so says MarketWatch. Inventories fall significantly. OK, question time, what happens when  you have near record inventories and you basically cut production in half and consumption increases slightly? Folks, do not get to excited about real demand increasing for some time. Now, will this inventory change effect the forward spot price for NG thus driving UNG higher? That is yet to be seen. That is the danger to the trade.

Working off oversupply while dramatically cutting production = reduced inventories which does not necessarily mean increased pricing structure which is what we care about.

Here is the link to the EIA NATGAS page.

Sure, this is a form of price manipulation and you will pay for it in the end. You, the consumer, are witnessing price manipulation that is not working in your favor, but instead in the name of salvaging corporate profits. On the conspiracy side, I am beginning to wonder if the NATGAS price destruction was a predetermined action in relation to the green movement in some way that has been influenced by the carbon kooks and big oil?

Then again, to what extent do you really trust any numbers coming form any government agency? IMO, you should not. Should that work into your trading decisions? I do not think so. You need to find the momo and where "they" want prices to go and ride that train. right now that momo is still to the downside and will remain there till proven differently.


NATGAS and UNG are not exactly tracking each other any more. Well they are, just from a distance. I am not commenting on the dislocation other than a lot of people who bought UNG for the pop got ripped off IMO. I think this is one of those "charts you are not supposed to see". If things were "normal" UNG should be somewhere near $20 right now.

UNG daily - This chart's indicators look pretty green and may have a chance to run. RSI cracking the divergence line could be a key point for the bulls. The weeklys do not look as bad as they have in the past (kind of mixed right now). For the bears I have some black arrows showing prior interaction with the MA's in this fall. That combined with the upper channel resistance would cause me to caution against any aggressive move here. There is a lower blue box with a question mark in it  that I deem a possible target based on the channel, MA's, indicators and cycle lines. Is there a possible H&S in there? Yes, but .... Can it make it to gap resistance? Yes, but .... 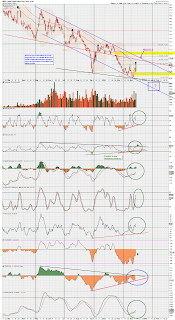 Again (as usual) I caution investors and warn that UNG moves mainly as a function of the forward spot price. If it goes up so does UNG. If not, it falls. Based on the first chart, once would speculate that a correction is in order. That is it. you are either lucky or not.


Now let's look at another relationship that NATGAS shares with OIL. The ratio of the price of oil to the price of NATGAS is out of proportion now and a correction is in order. There are a lot of people that believe NG will be retesting the recent lows. That would require one heck of a fall in oil. there are so many possibilities that can drive prices around, I won't speculate on what could happen (war, global depression, carbon credits, you name it.). I believe Oil will do most of the work here over time as I believe Oil is going to $55. 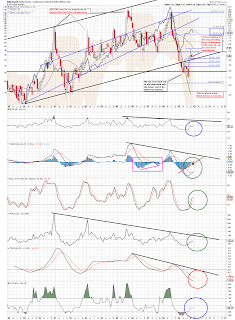 You UNG investors need to be nimble and keep the stops tight. It could run to the moon, but then again it has been proven time and time again that there is not yet a limit to how low it can go. There is a bunch of resistance above right now, and I would not chase it here. That is a big bullish candle, but it also left a nasty gap. That is pretty typical MO for every move off of a low so far. If it were to get above the upper channel line and if we can get some sort of established EWT count going up, then I'll look into holding it. Till then, I'll keep swing trading off of the bottoms. I'll  add that IF it should break out and the H&S plays out, somewhere near 14.50 would be the target (there is a nice resistance line near there).


GL and have a great holiday season .
Posted by Shanky at 3:11 PM