Is 4 (or 2) or C of P2 over, or is the double zig-zag beginning here? The one constant in the /ES is the lower white trendline of the channel I have drawn identifying the ABC move off of the top. The other obvious thing is that price pretty much obeyed the rising sky blue wedge (on a daily chart) that led to the throw over of the dominant P2 wedge. See the move from top to bottom. So, is there a new, larger channel down forming now for the ABC or 1 of P3? Tough call. Will the buy the dippers show back up after taking last week off?

Looks like Stockcharts is down again this am. Go figure. Let me take yet another shot at their knee caps. They suck and are highly unreliable. I have used them for quite some time now and find them to be quite polite but lacking. Kinda like the super hot chick that has everything but fails miserably on the business side. TOS is free and has like a million more functions. If I did not have so many charts built there I'd be gone. Sure they do have a few advantages, but not worth paying for IMO.

No links to daily or 60m charts this am. LOL. Thanks to TOS, we can do it without them.

/ES 60m - As noted above, it is holding the sky blue rising wedge for now. Indicators on 60m are turning up. The clear break of the green channel down did happen after hours, so we'll have to look at an SPX chart later to confirm. Shorties need to pay close attention to that top trendline of the white ABC channel down. the top line may not be in the right place. I drew it ignoring the spike to 1075 at this time, so it may nee to be adjusted up. 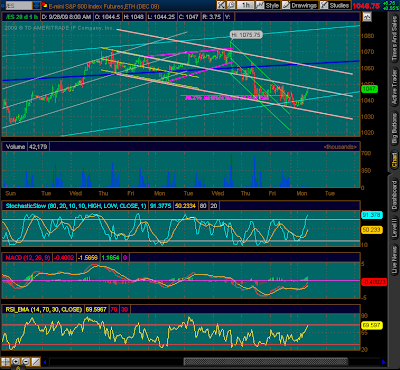 /ES daily - MACD is just now getting it's confirming bear cross on, but is also running into it's lower trendline. Vol is picking up some. RSI may be a concern for the bears. S Sto is still headed south. If you notice at the top of this chart the Pink line (gap at 1104) and the white trendline marking the bear market top line. Those will be coming into play soon I think. 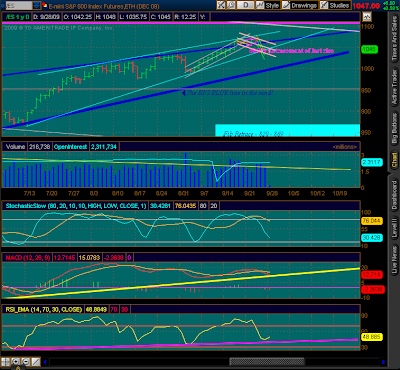 /ES did form a nice falling wedge (not drawn) as it broke out of the C channel down. 1059 is a good target for that wedge breakout. The fibs retracements if she is turning up here are 1055 to 1060. Those correspond nicely with the new top channel line and the top line of the blue P2 wedge. 1049 to 1052 is key resistance point for the bears. If this was 1 of 1 of P3 those numbers should be a good stopping point for 2 of 1. We may be able to tell soon if we are in P2 or P3 for sure.

GL trading this week!
Posted by Shanky at 8:21 AM