Confusion reigns down on the Nat Gas sector. Buy, sell, stay away, you'll make a fortune, buy the producers, buy the commodity, the bottom is in, supply is down, demand is going to grow, Nat gas is going to $2; what the hell? Below are a few posts that I liked from around the web. (Notice the prominent words Volatile and Speculative)

Forbes - 9/21 - Natural Gas Still Too Volatile. "Natural gas prices have recently become lighter than air, as the commodity finally gets some love after a year-long slide. Yet even though it has gained traction, our team of investment advisors is cautious about the fuel, unconvinced demand is set to take off." There you have a more definitive call.

Greenfaucet.com - 9/21 - Speculating on Natural Gas. After moving from $2.50 to $3.77 per BTU last week the pressure is back on the price of natural gas. The rally is based on speculation that prices will continue to rise as inventories fall. Therein lies the issue. Supply has dropped the last two weeks, but not enough to push prices significantly higher. If I were an investor (oh yea, I am) I would take my profit off the table and see how this plays out. The instability in the natural gas contracts has been evident as the downside pressure has controlled the trend. Sounds just like the same thing I have been saying. I like the folks at Greenfaucet and suggest you take a peek at their site while you are there.

Seeking Alpha - ETF Stats for UNG Gives a nice list of SA authors that cover Nat Gas and is worth bookmarking for when you need some good posts on the subject.

BOTTOM LINE is you need to check out EIA's Natural Gas Weekly Update (I added a link in my blogroll). They have the definitive release on Nat Gas pricing and information. You get it from the horses mouth (not the other way around). Very detailed information from the government on the pricing of Nat Gas and the economies surrounding pricing. I'd highly recommend you visit this site for an update before you invest.

EIA provides a monthly Short-Term Energy Outlook. The next update is October 6th. Did you know this, "Despite low relative prices for much of the year, industrial natural gas consumption declined by 12 percent in the first 6 months of 2009 compared with the same period last year. EIA expects this year-over-year consumption decline will continue through the second half of the year for industrial users, although the trend will be less pronounced." How about this, "EIA expects natural gas consumption will increase slightly in the commercial and industrial sectors in 2010 as a result of improved economic conditions and low prices. Consumption remains relatively flat in the residential and electric power sectors next year. The anticipated addition of new coal-fired generating capacity and rising natural gas prices limits the potential for significant increases beyond the forecast 2009 level in natural gas consumption by electric generators."

In other words, don't be looking for some massive recovery in the price of Nat Gas this year or next. This report can give you some reliable information regarding the outlook for crude, nat gas and coal. I will be making it a must read and will notify you of its release here.

I have no hope for any significant rise in UNG till the over supply under demand issue straightens its self out. Sure, as futures roll thru there may be sentimental pops, but the EAI reports say no demand for a year or two until the economy recovers. I expect a long drawn out bottom at these levels for some time.

Given that UNG is still trading at a significant premium to NAV ( Sept 21 - 10.57 NAV and UNG close 11.25, 6.43% which is narrowing) since the supply demand issue is not (nor will it be for some time) worked out, and the general (and expected to be worsening) economic conditions, I fully expect the lows to be tested again.

OK, that all being said let's look at a chart and apply some TA to the situation. 30 and 60m indicators are falling. The daily indicators are topping out. Weekly indicators are mixed. The run off of the capitualive bottom has reached the retracement zone above the 50% fib retracement line. UNG left several gaps on the way up. Price has broken the uptrend line. UNG is forming a possible bull flag at this time. As for the form of the climb, I do not like an ABC. I prefer a 1,2 or a 5 wave count. If a 1,2 I expect a pullback to the 10.45 to 10.10 range. If this is a 5 wave move and 5=1 and gap support holds here the target range should be near 13.18. 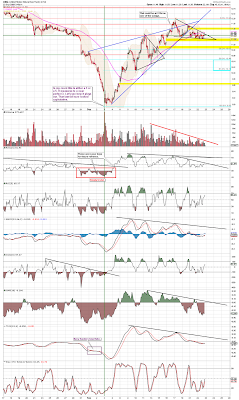 Nat Gas - Oil Spread chart - (Better viewed here). Nat Gas drove up to test it's LT lower trendline and put a spike thru it. Oil is leveling out. Please visit the older Zero Hedge link in the chart for more information of the spread of NG to OIL. This will correct, I believe oil will do most of the correcting downwards. I believe this monthly chart of Nat Gas shows the bottom is in (or should I say it won't get any worse than it already has). 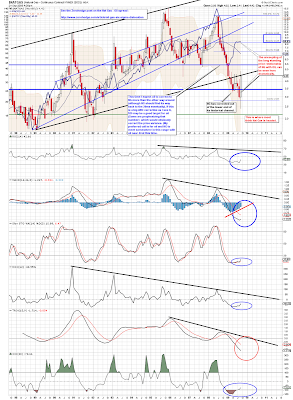