OK, I hate head fakes. Can't stand 'em. I thought the breakdown yesterday would be a near term top, but blew it. I also thought the back test of the channel and a strike of the 50% line of the larger channel would have been significant, but it was not either. Stockcharts being down did not help my cause. I did leave myself a few outs on the call as I noted the daily indicators we're not primed for a turn and that we could be in what I think is either a 4 or 5 of C up or on the other hand this could be just the ending of 1 of 3 of C up as well (at this time I prefer the 1 of C ending count). I just hate being wrong. Note: the early August triangle target of 1051 has been met now (see 60m SPX chart).

We might be forming a new channel on the /ES as it might be rolling over. My target range has been entered as 1050 on the SPX was topped. Still roughly a month to go till my top date and some room left to get to 1121.

No stockcharts today as those lame suckers were down all day yesterday. The daily RSI tried to turn yesterday where I thought it would, but turned slightly positive in the afternoon. MACD got a confirming bull cross and the histogram is bulging like some kid watching Megan Fox. S Sto is topping and can embed, but I still do not think it will. ADX buy line has turned south finally. The upper trendline on the SPX chart is being tested again. I hate to say that there is another way to draw the channel, but I am not going there. 60m ADX put in a perfect head fake yesterday. Volume is still disappointing.

I'm of the opinion this is some sort of blow off top to end 3 of C. Up over 6% in the last week on ZERO fundamentals and the surrounding economic environment has to give something back soon. The breakdown of the channel IMO says the market is putting in a near term top. The SPX appears to be possibly wedging with this being a C touch. This can be seen on my 60m SPX chart and the longer term /ES chart below. What I think could possibly happen is one more move to the lower trendline of the /ES channel and one last blow off top in early October. That is my dream scenario.

/ESU9 chart below shows the breakdown and back test of the yellow channel we have been following. What is now in the picture is the dark blue trendline that is the upper trendline of the larger wedge near 1060 (the original GS target for the market top). The sky blue channel is just a thought right now, but shows the potential rollover happening. Maybe I was just a day or so early with my call of a pullback. We'll see.

I plan on doing an update on Oil, Gold, UNG and the dollar today in a post for each. 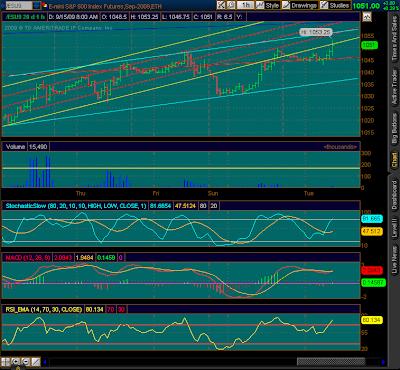 Daily /ESU9 - You can see the larger wedge formation where price is nearing the top blue trendline. What I really want you to look at is the VOLUME. 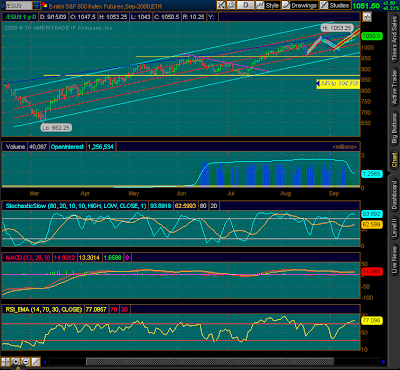