A Quick Look At The Minis And The Monthly SPX

I got a buy signal on the daily SPX earlier. This is not major move or anything as the buy signal occurs in an already bloated market. Several indicator trendlines held or yielded some before they turned back up. I was one of the few that told you to watch daily RSI at the 50.The only reason I am pointing this out is that shorties might be suspect to one more mini squeeze in this irrational market correction.

The actions of the market overall are very suspect. I am in cash now and will wait for some better signals as to more sustained direction develop. As for the count? I'm still at this time looking at 4 of 1 of P3, but that is not official as any other count is most likely bullshit as no one can count this quintuple zig-zag manipulated crap. I'd watch 1013 on the /ESU9 if I were you. I still like my ABC to 1050 - 1121. We'll see.

Based on this monthly chart sure looks like there is some room to run based on the indicators positions and trendlines being busted all over. Permabears, the monthly RSI is stalling and the Fast Sto has a hook as well as the 200ma is now acting as resistance. Hell, one can actually look at this chart and say it is all over and a new bull run is in based on lots of technicals in it, but we all know that is not the truth.

Short term /ESU9 - Top trendline of the channel is holding and it appears to be consolidating in a triangle between the upper channel line and the lower 75% line of the GSEC channel. Daily /ESU9 - You can see the long term channel and wedge here really well with a couple of lower support points. The black line is the only GAP i could locate. It will be am important number in the future IMO. 900 - 906. 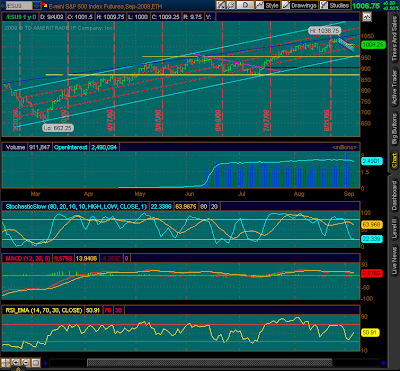 UPDATE - Lower channel busted and 1013 taken out. Let's see what the counters do now with wave 4 busting into wave 1's turf. I think that sound you just herd was 1,000 protractors hitting the wall simultaneously. Scramble time baby. Oh, that buy signal I got. Yeah baby! 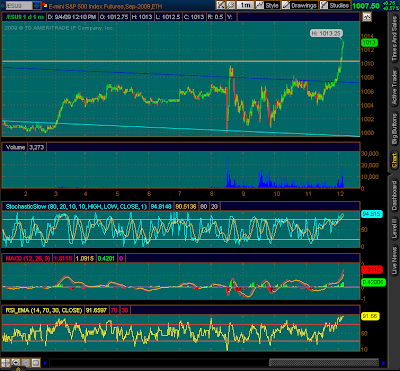