Channeling down as can be seen in the 30m /ESU9 below. Small pop down on the disappointing ADP report this am. So what if they missed by 60k. Whats 27%? Hell, Ford missed by 50% and that really did not mean shit either. I am surprised CNBS reported it. Pay no attention to the man behind the curtain.

The 60m chart - Indicators almost bottomed out and blown out bottom of lower BB. I no longer pay much attention to the 60m indicators as they have been very unreliable of late, but they are near the bottom and should embed.

I expect some follow thru from yesterday. If this thing gets some momo look out. If this is the end of a 3 and we have a 4 corrective, 5 should take us right to 980/974 range. That would end 1 of 1 of P3. Holiday weekend coming up and some are speculating some big bank issues then. Might make a good set up for a 3 down on Monday!

Kenny has his C top and Dan has his P2 top called. Still grinding over my no top call. Thanks for all the positive emails and comments. They are appreciated. As Aidyn noted, calling the top is not important, making $$ is. I am short and playing it as the top is in and you should too. THE STRUCTURE OF THE FALL is the most important thing to pay attention to now.

I'll be doing the long promised UNG post this am. 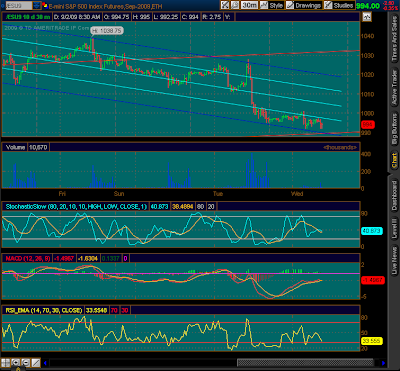